This talk is available as a Horns of a Dilemna podcast here.

Photos of the event are here. Video is available here. 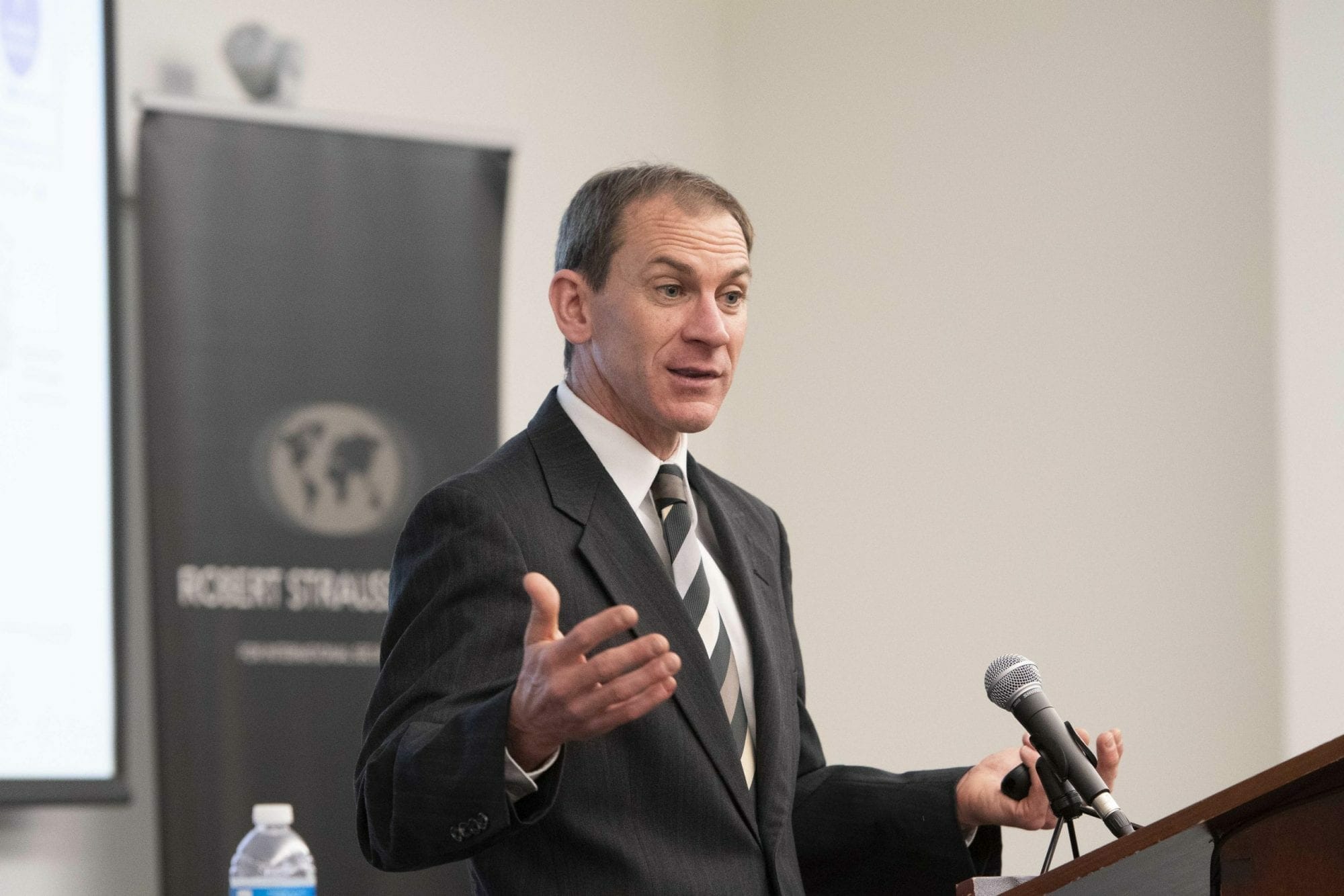 Hybrid warfare, as Collins defined it, is a mix of regular and irregular warfare that uses new informational methods. He explained, “this is not new – modern information flows faster and platforms have changed – but this is not a new idea.”

Russia’s hybrid tactics in Ukraine have produced devastating effects. Since the beginning of the conflict in 2014, GDP has fallen by nearly 50%, and over 4,000 Ukrainian armed forces members have been killed. To put that in perspective, Collins noted, that’s nearly as many troops as the U.S. has lost in Iraq since 2003.

Collins explained that Russian strategy in Ukraine is an amalgamation of lessons learned from the Second Chechen war, its 2007 cyber attack on Estonia, and, perhaps most importantly, the 2008 Russo-Georgian War. In 2008, Georgia’s interest in NATO prompted Russia to invade; the war lasted a total of five days. As a result of the conflict, Russia was able to capture and separate both Abkhazia and South Ossetia from Georgia. The conflict was also the first time Russia used cyber operations alongside its kinetic operations. However, Russia did ultimately lose the information-war in Georgia. As Collins noted, “it’s hard to win a battle of opinion alongside massive troop movement.” Over the next few years, Collins explained, Russia perfected its model of invading neighboring countries; then it put its war plans on a shelf and waited.

When Russia invaded Crimea and Donbass in 2014 it went in with “little green men” rather than large troop movements. In Crimea, Russian forces seized government facilities and helped establish a new government. This new puppet government then appealed to well-established Western norms by asking the international community to both respect and support its self-determination. Just like that, Collins remarked, “Russia was able to seize Crimea without firing a single shot.”
In Donbass, separatists, comprising a small minority of the region’s population, are aided by Russian forces, advisors, and equipment. On average, Collins reported, two Ukrainians are killed each week and ten more are wounded. 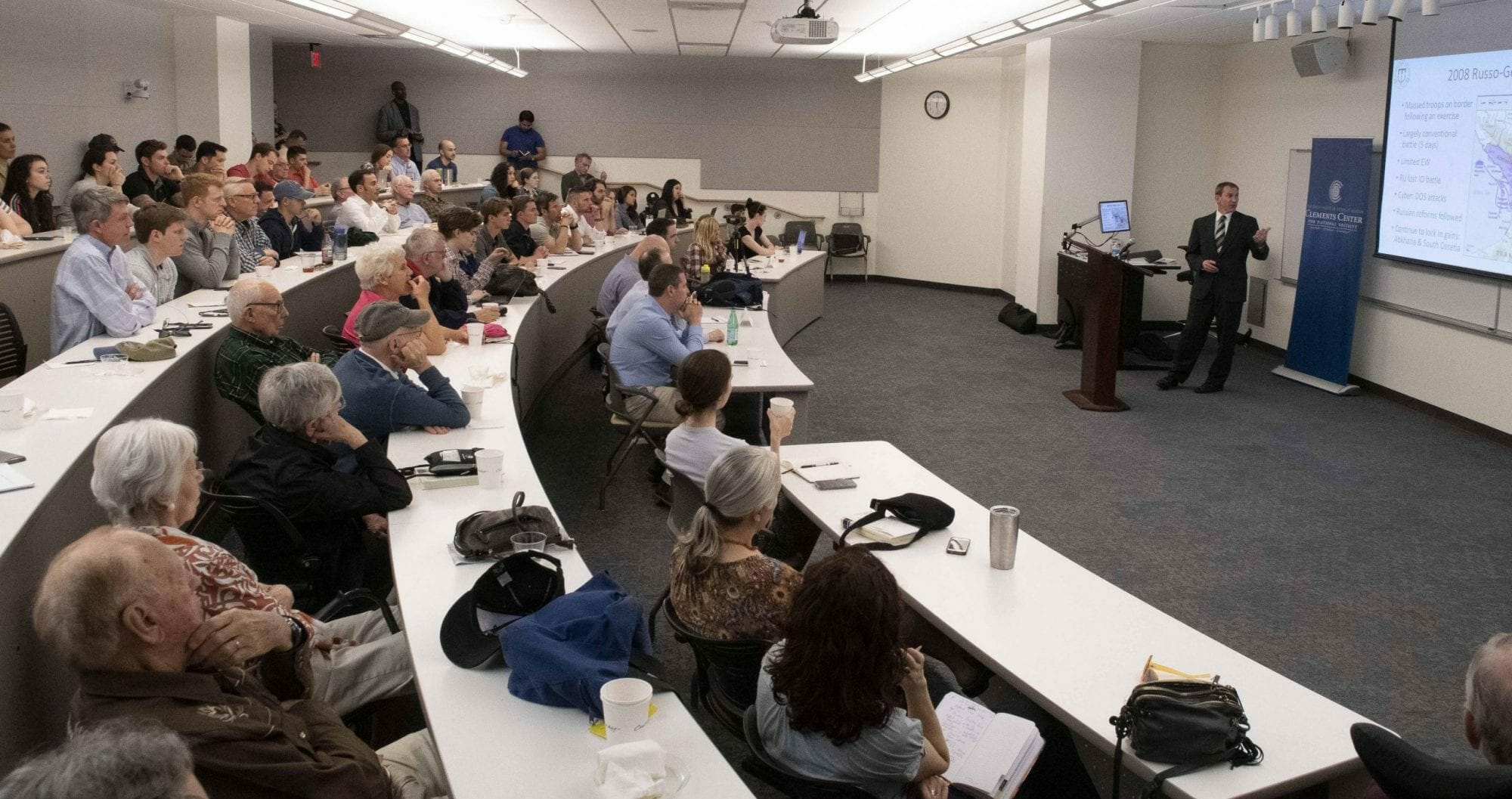 Collins broke Russia’s hybrid warfare strategy into three distinct phases:
• The Preparatory Phase, consisting of strategic, political, and operational preparation,
• The Attack Phase, in which Russia exploits tensions, ousts the central power, and establishes a new government, and
• The Stabilization Phase, in which Russia seeks to politically stabilize the outcome of the conflict, permanently separate captured territory from the target country, and impose lasting limitations on freedom of movement.

Collins suggested that Russia is making such “preparations” in countries across the world. It is currently in the middle of the attack phase in Ukraine, and it has successfully stabilized Abkhazia and South Ossetia in the aftermath of the Russo-Georgian war. While this strategy has worked, arguably quite well, in Georgia and Ukraine, Collins asserted that the model is not all that exportable. However, it could be utilized in countries with an existing, large Russian base, such as Latvia or Estonia. 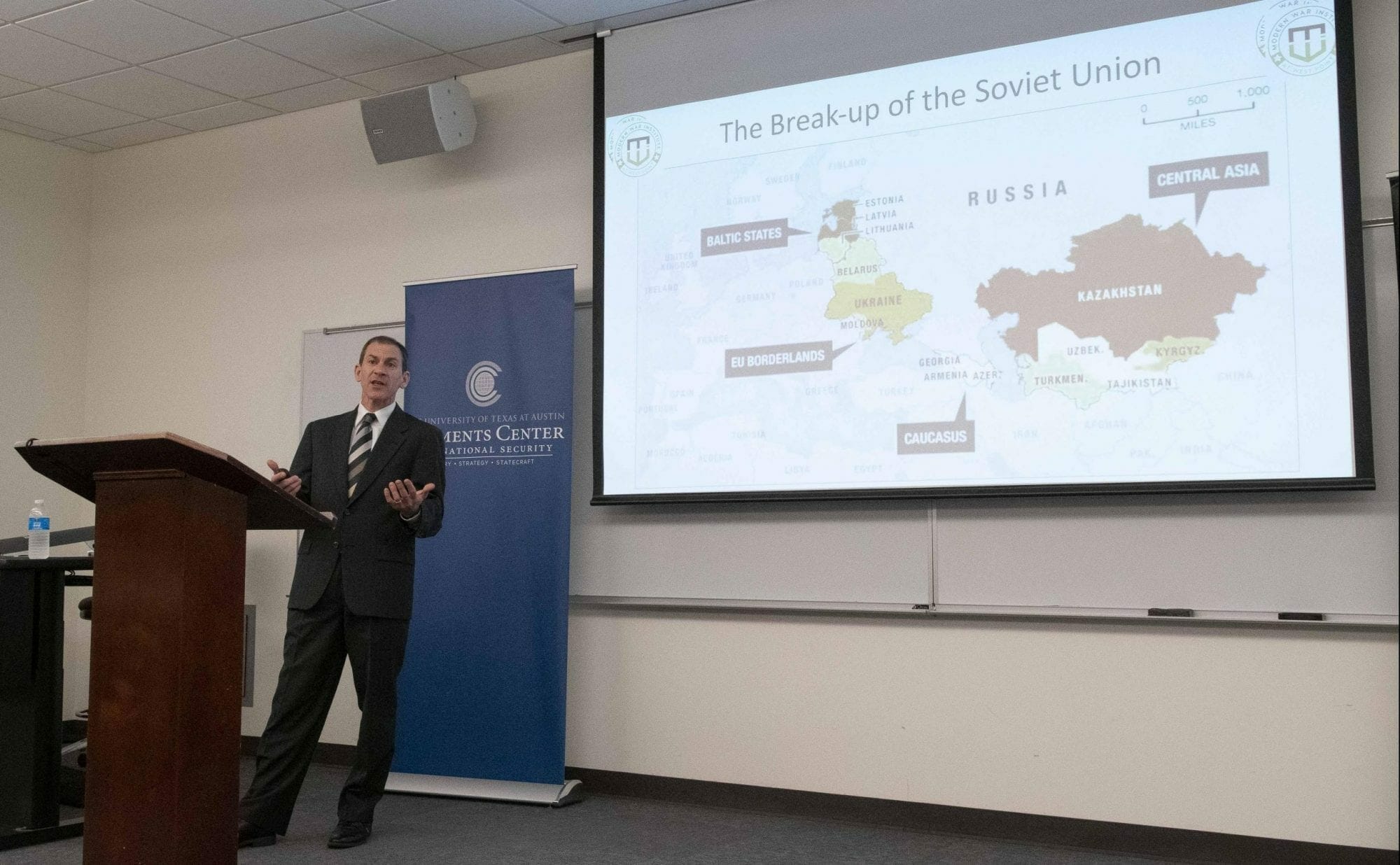 Collins reasoned that the best way to deter Russian aggression is to increase front-end costs of invasion and continued occupation: “We can’t outspend them, so we have to increase front-end costs as much as possible.” Collins suggested methods by which the U.S. could both increase Ukrainian military effectiveness and decrease Russian effectiveness. Collins urged the U.S. to provide defensive aid to Ukraine, explaining that present aid levels to Ukraine are too low. In order to build the capacity of the Ukrainian military, the U.S. could provide more cost-efficient equipment. Namely, Collins explained that the Ukrainian military could benefit greatly from additional anti-tank weapons, such as Javelin missiles. In the realm of air defense, Ukraine could downsize costs by focusing on procuring shoulder-mounted Stinger missiles rather than expensive and conspicuous Patriot missiles. To impede Russian effectiveness, the U.S. could help Ukraine bolster its cyber and electronic warfare defenses.

Ultimately, Collins concluded, this is, and will be, a long war for Ukraine. At present, public opinion is consistently cold toward Russia and warm towards the U.S. However, Collins warned, “Ukraine could still turn East.” Ukraine is going to get tired, and when it does, it might look back to its big brother, “the big bear.”

Colonel Liam Collins is a career Special Forces officer, who has served in a variety of special operations assignments and conducted multiple combat operations to Afghanistan and Iraq as well as operational deployments to Bosnia, Africa, and South America. He has graduated from several military courses including Ranger School and has earned numerous military awards and decorations including two valorous awards for his actions in combat. Prior to assuming his current position as the Director of the Modern War Institute at West Point, Colonel Collins served as the director of West Point’s Combating Terrorism Center. He has taught courses in Military Innovation, Insurgency and Counterinsurgency, Comparative Defense Politics, Research Methods in Strategic Studies, Homeland Security and Defense, Terrorism and Counterterrorism, Internal Conflict, International Relations, American Politics, and Officership.  He has a bachelor’s degree in Mechanical Engineering from the United States Military Academy and a Master in Public Affairs and Ph.D. from Princeton University.