Russian Active Measures and the U.S. Response: Lessons from the Cold War

On Tuesday, April 23, 2019, the Intelligence Studies Project welcomed Seth G. Jones, Director of the Transnational Threats Project and a senior adviser to the International Security Program at the Center for Strategic and International Studies. The event was co-sponsored by the Strauss Center and Clements Center.

This talk is available on the “Horns of a Dilemna” podcast here. 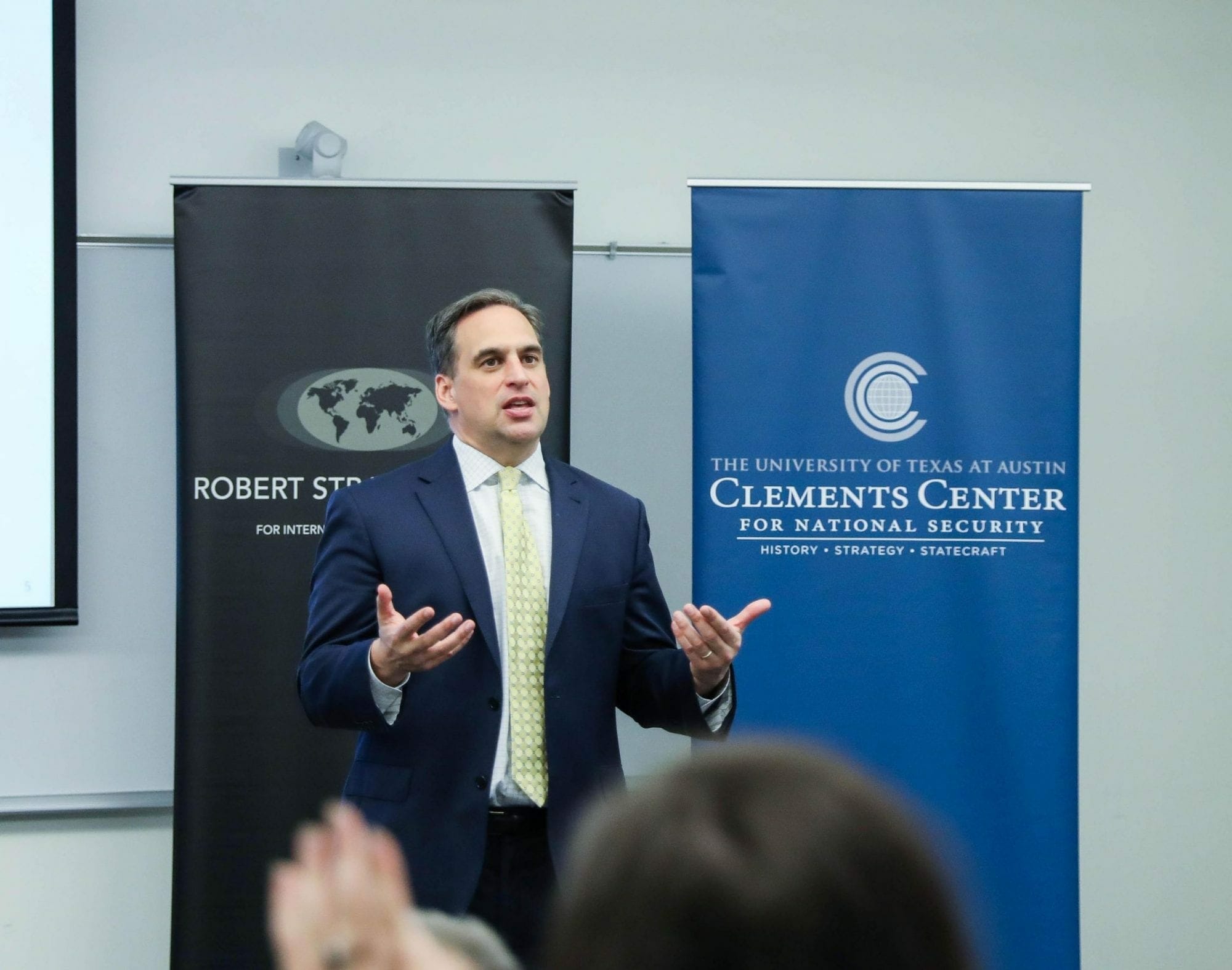 Jones spoke about his most recent book, “A Covert Action: Reagan, the CIA, and the Cold War Struggle in Poland.” The book examines the little-known story of the CIA’s operation in Poland, QRHELPFUL, which produced a landmark victory for democracy during the Cold War. The book, as Jones explained, is an in-depth look at how the Reagan administration elevated information to be one of the preeminent powers of the United States in the fight against communism.

Jones began his talk by providing context for what Soviet efforts, both in Poland and across the world, looked like in the early 1980s. Jones explained, “Russian active measures are different from espionage; they are about influence, at home and abroad, to the benefit of Moscow and the detriment of the United States.” Active measure campaigns used front groups, radio broadcasts, newspapers, forgeries, agents, assassinations, intimidation, and other tactics as tools in a much larger effort to spread Soviet influence. Jones pointed to the World Peace Council (WPC) as an example of a Cold War active measure. WPC was, and is, an organization that advocates for decreasing and eliminating nuclear weapons, most prominently, in Western Europe; during the Cold War the WPC was funded almost entirely by the KBG.

Jones explained that in 1980s Poland, Moscow’s influence campaigns sought to help the Soviet-backed Polish government suffocate budding liberal opposition. In August of 1980, the Gdansk Agreement ended labor strikes in shipyards along the Baltic and legalized the existence of Poland’s first independent trading union: Solidarity. The formation of Solidarity scared Moscow; the Soviets saw Solidarity as the beginnings of an organized resistance. Tensions heightened over the next year, and Jones revealed that there was much debate within the U.S.S.R. about whether to invade Poland. Soviet leadership decided against invasion and instead exerted pressure on the Polish government to crack down. The Polish government imposed martial law, deployed tanks, utilized detention centers, and by 1982 it was unclear if Solidarity would survive. However, Jones explained, even at its weakest point, Solidarity provided a continuous stream of news for the anti-communist opposition both in Poland and in greater Eastern Europe.

In the U.S., Ronald Reagan had taken office and appointed spymaster, Bill Casey as Director of the CIA. As the Solidarity underground came under increasingly intense pressure, the CIA, supported by Reagan, crafted a covert action program to aid Solidarity and other dissident groups. The program, QRHELPFUL, was created to bolster Solidarity as a movement; rather than providing arms, QRHELPFUL provided non-lethal support in the form of printer-cartridges, duplicators, and monetary assistance. U.S. objectives for QRHELPFUL were to aid the organizational activities of Solidarity, exert pressure on the Polish government and Soviet Union, and improve capacity for communication into, within, and out of Poland.

So, Jones stipulated, the question in Washington then became: how do we get equipment into Poland? “Solidarity, at the time, had ten million members and far more readers; the organization would need lots of duplicators.” QRHELPFUL was not designed for the CIA to work with Solidarity directly. Rather, the program worked with intermediaries, utilizing existing ratlines in and out of Poland, to smuggle in equipment and aid. “A duplicator travelling from Paris to Gdynia,” Jones remarked, “would pass through seven or eight different sets of hands… Never did a U.S. agent hand off money or equipment directly to a member of Solidarity.” By 1984, it was clear that the Solidarity underground was receiving aid, and while they had their assumptions, neither the Polish government nor the Soviets could definitely identify the source. Jones emphasized that this was one of the key reasons why QRHELPFUL was so successful: the CIA didn’t create anything. It leveraged what was already there and what the Polish people already viewed as legitimate. 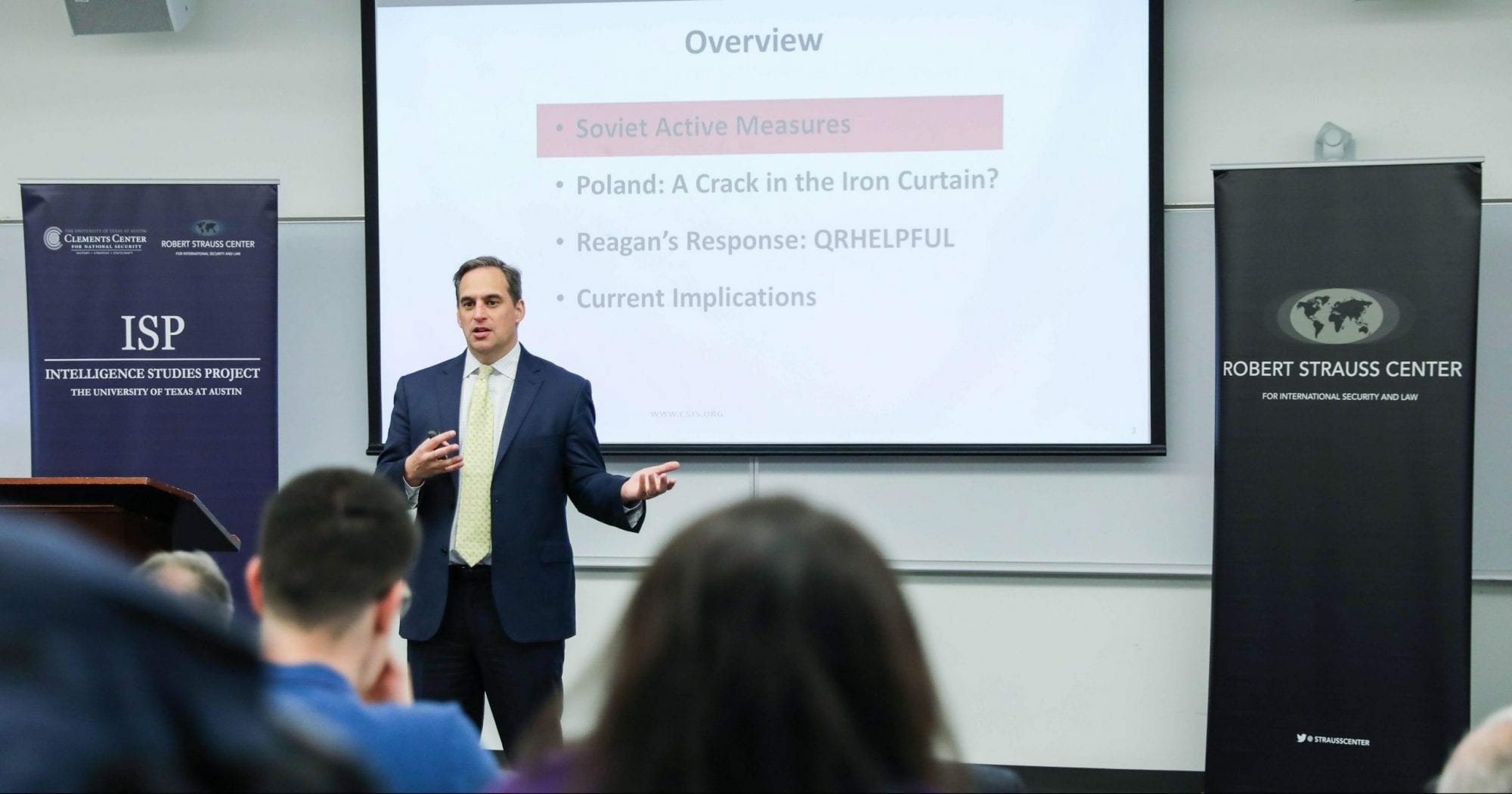 In 1989, Poland held somewhat free and fair elections. Later that year, Solidarity leader, Lech Walesa visited the U.S. Congress. Jones reported, “When he spoke in front of the joint session, there were members of congress, from both sides of the aisle, weeping.” Solidarity, a formerly illegal organization, a party nearly destroyed a decade prior, had survived.

Jones concluded by discussing what implications the story of QRHELPFUL has for today. Most poignantly, Jones remarked, “Today, Russian active measures can be categorized as an effort to sew discord – their goals have not changed – to benefit Moscow to the detriment of the United States and its allies.”

Seth G. Jones holds the Harold Brown Chair, is director of the Transnational Threats Project, and is a senior adviser to the International Security Program at the Center for Strategic and International Studies (CSIS). He teaches at Johns Hopkins University’s School of Advanced International Studies (SAIS) and the Center for Homeland Defense and Security (CHDS) at the U.S. Naval Postgraduate School. Prior to joining CSIS, Dr. Jones was the director of the International Security and Defense Policy Center at the RAND Corporation. He also served as representative for the commander, U.S. Special Operations Command, to the assistant secretary of defense for special operations. Before that, he was a plans officer and adviser to the commanding general, U.S. Special Operations Forces, in Afghanistan (Combined Forces Special Operations Component Command–Afghanistan). In 2014, Dr. Jones served on a congressionally mandated panel that reviewed the FBI’s implementation of counterterrorism recommendations contained in the 9/11 Commission Report. Dr. Jones specializes in counterterrorism, counterinsurgency, unconventional warfare, and covert action, including a focus on al Qaeda and ISIS. He is the author of A Covert Action: Reagan, the CIA, and the Cold War Struggle in Poland (W.W. Norton, 2018), Waging Insurgent Warfare(Oxford University Press, 2016), Hunting in the Shadows: The Pursuit of al Qa’ida after 9/11(W.W. Norton, 2012), and In the Graveyard of Empires: America’s War in Afghanistan (W.W. Norton, 2009). Dr. Jones has published articles in a range of journals, such as Foreign Affairs, Foreign Policy, and International Security, as well as newspapers and magazines like the New York Times, Washington Post, and Wall Street Journal. Dr. Jones is a graduate of Bowdoin College and received his M.A. and Ph.D. from the University of Chicago.