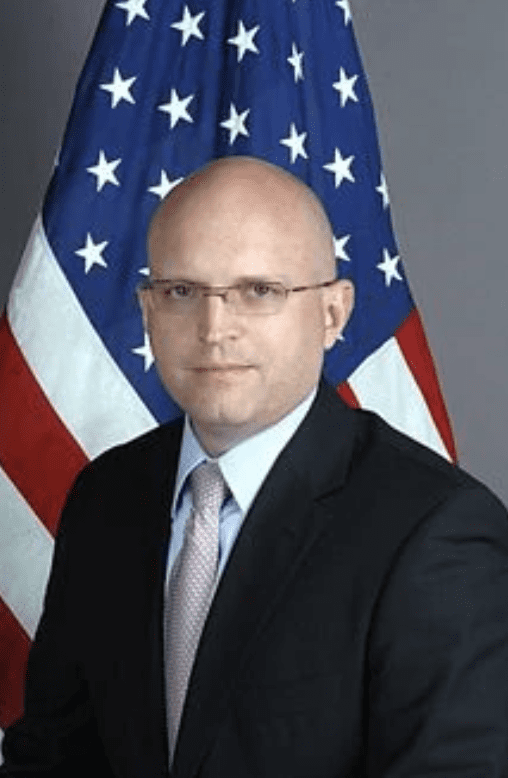 Diplomacy at the Center of Foreign Policy: Opportunities and Challenges to Restoring American Engagement with the World

On Monday, April 19, the Strauss Center welcomed Ambassador Philip T. Reeker, the Department of State Acting Assistant Secretary – Bureau of European and Eurasian Affairs to give a talk on “Diplomacy at the Center of Foreign Policy: Opportunities and Challenges to Restoring American Engagement with the World”. This webinar was part of our Brumley Speaker Series.

During his opening remarks, Ambassador Reeker spoke about Secretary of State Blinken’s priorities for the State Department and for the Bureau of European and Eurasian Affairs. These priorities included responding to Russian aggression in cyberspace and its intrusive actions in and near Ukraine, rebuilding diplomatic partnerships with U.S. allies and partners across Europe, and cooperating with other countries to combat the COVID-19 pandemic. Ambassador Reeker highlighted some of the achievements of the new administration and its renewed emphasis on diplomacy in foreign affairs.

Ambassador Reeker also spoke on the importance of diversity at the State Department. Some of the recent diversity and inclusion initiatives include the appointment of Ambassador Gina Abercrombie-Winstanley as the Department’s new Chief Diversity and Inclusion Officer and the Bureau of European and Eurasian Affairs efforts to recruit more diverse foreign and civil service officers within the bureau. He concluded the talk with some advice for students interested in joining the State Department.

Ambassador Philip T. Reeker has led the Bureau of European and Eurasian Affairs since March 2019.

Prior to taking up duties in Washington, from 2017, Ambassador Reeker was Civilian Deputy and Policy Advisor to the Commander of U.S. European Command, in Stuttgart, Germany. He served as the United States Consul General in Milan, covering northern Italy, (2014-2017), and as Deputy Assistant Secretary of State for European and Eurasian Affairs focused on the Balkans, Central Europe, and Holocaust Issues (2011-2013).

He was U.S. Ambassador to North Macedonia from 2008 to 2011, and Deputy State Department Spokesman/Deputy Assistant Secretary for Public Affairs, under Secretaries of State Albright and Powell (2000-2004). Previous assignments also include: Minister Counselor for Public Affairs under Ambassador Ryan Crocker at the U.S. Embassy in Iraq (2007-2008); Deputy Chief of Mission in Budapest (2004-2007); and Director of Press Relations at the State Department (1999-2000). Ambassador Reeker joined the Foreign Service in 1992, and served earlier tours in Budapest, Hungary and Skopje, North Macedonia.

Philip Reeker received the Chairman of the Joint Chiefs of Staff Joint Distinguished Civilian Service Award in 2019, and the American Citizens Abroad Thomas Jefferson Award in 2017 for services to the community of Americans living abroad. Also in 2017, he was named a Commander of the Order of Merit of the Italian Republic for his distinguished service in Italy. He was the 2013 Recipient of the Robert C. Frasure Memorial Award for “his commitment to peace and the alleviation of human suffering caused by war or civil injustice” in the Balkans; the National Albanian American Council presented Ambassador Reeker with its “Hands of Hope Award” the same year. He received the Edward R. Murrow Award for Excellence in Public Diplomacy in 2003, and several State Department Superior Honor Awards.

Ambassador Reeker is a graduate of Yale University (1986) and received an MBA from the Thunderbird School of International Management in Arizona (1991). Born in Pennsylvania, Ambassador Reeker grew up in several U.S. cities and spent his high school years in Brisbane, Australia. His foreign languages include: Italian, Hungarian, Macedonian, and German.