End of an Era: How China’s Authoritarian Revival is Undermining Its Rise

On Tuesday, September 11, 2018, the Strauss Center and Clements Center welcomed Carl Minzner, Professor of Law at Fordham University, for a talk on his latest book, End of an Era: How China’s Authoritarian Revival is Undermining Its Rise. The event was co-sponsored by the Center for East Asian Studies. 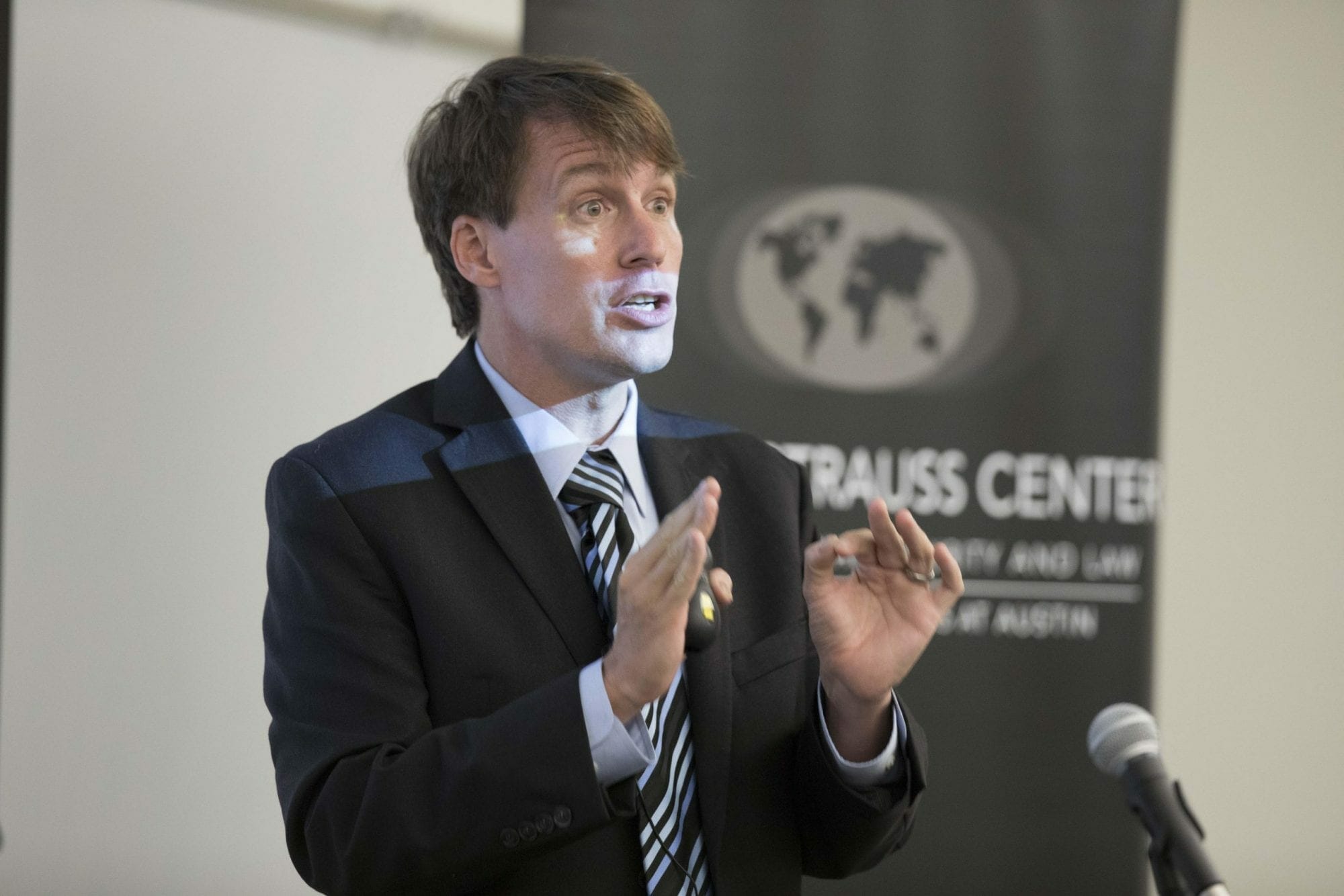 Minzner predicated his talk on the premise that China’s decades long reform era is over. Economically, ideologically, and politically, China is moving in a new direction when compared to its trajectory since the 1970s. Minzner explained that in pre-reform era China (1949-1978), the communist party was deeply ingratiated in people’s lives; Chairman Mao Zedong chose to rule through radicalized street movements and campaigns rather than through traditional institutions. In contrast, the following three decades, China’s reform era, can be categorized by the build-up of bottom-up party institutions, newfound openness, rapid economic growth, and the generation of somewhat liberalized political norms.

Today, Minzner asserted, “we are entering a different period.” The progress and norms of the reform era are unravelling in post-reform China. Minzner stipulated that China’s period of rapid economic growth is over, and while optimists expect China’s economy to plateau, pessimists look to a looming debt burden as one of many indicators of a much more daunting trajectory. 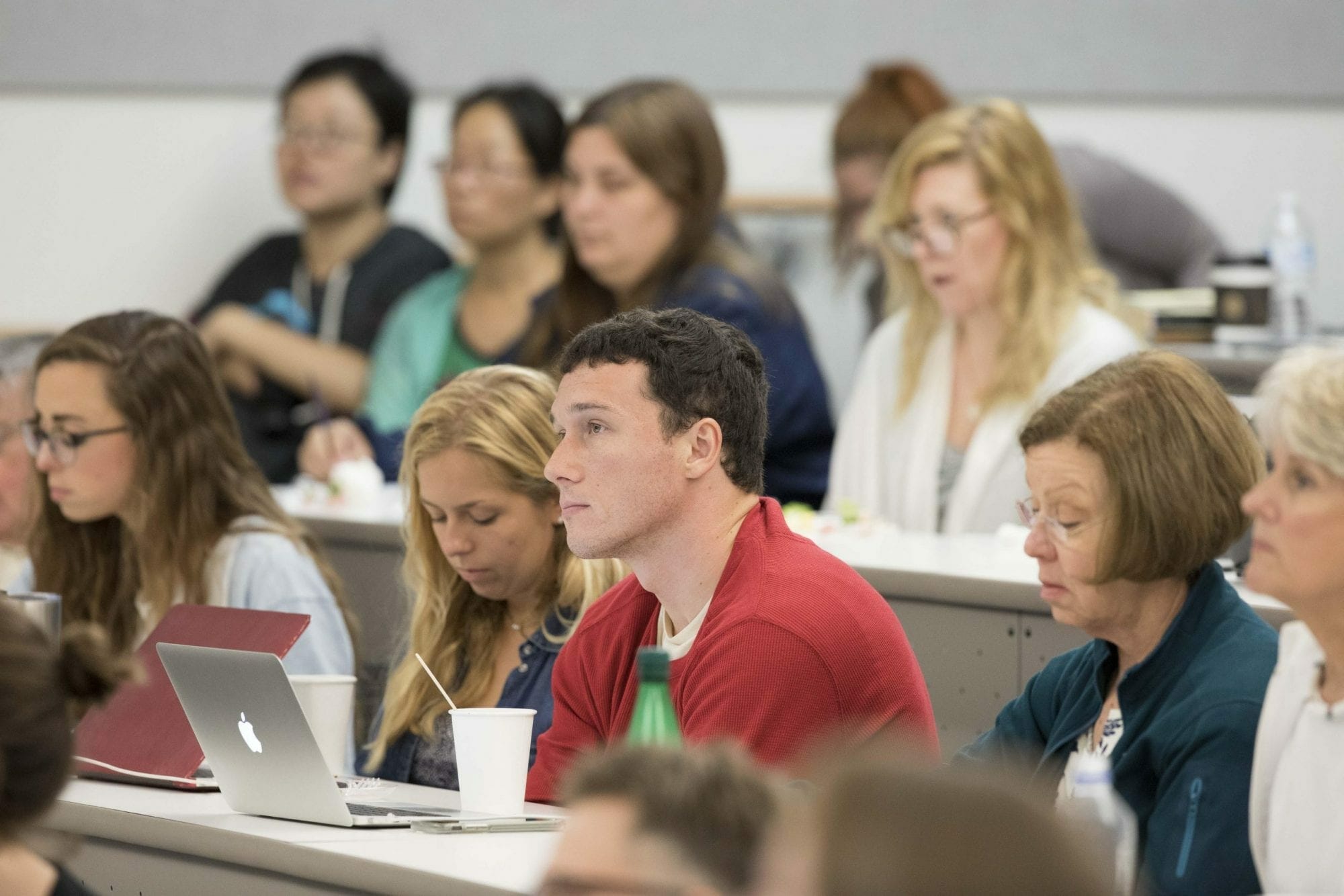 Ideologically, China is closing up on itself again. Minzner noted that since China is wealthier – now that China has risen – it is taking a greater interest in its own culture. Modern leaders are placing greater emphasis on Chinese culture, deploying Chinese tradition against Western values, and attempting to both define and narrow what it means to be Chinese. Ultimately, by doing so, leaders are creating tension within China on people who don’t fit into the narrow definition; this radicalizes marginalized groups, drives minorities out, and fuels domestic conflict. 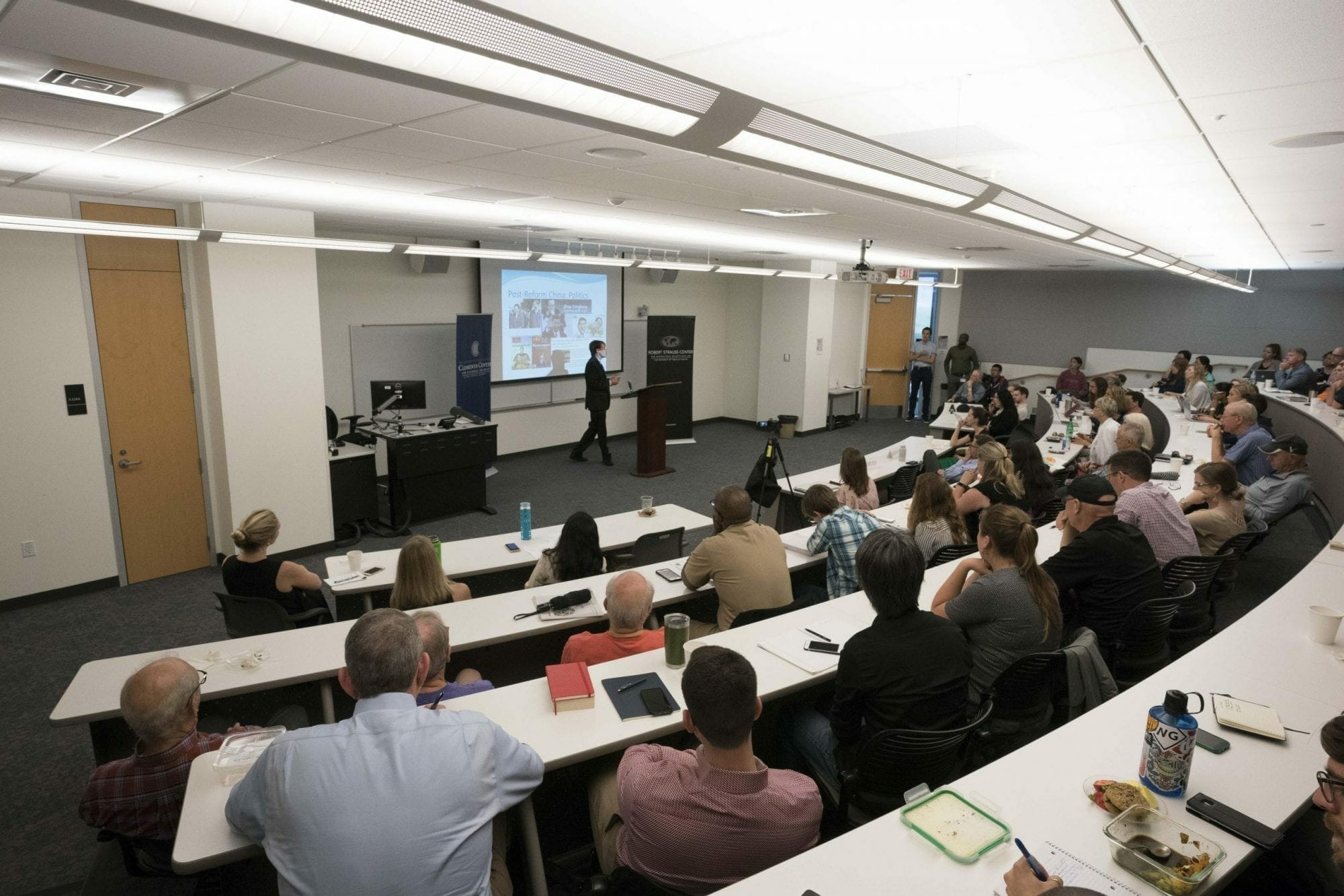 Minzner then turned to domestic politics. Tacit reform-era norms are breaking down. Central level officials are being jailed in the name of anti-corruption even after stepping down from power. The Politburo standing committee seems to be encouraging, if not abiding by, stricter age limits to both avoid the gerontocratic pitfalls of the Soviet Union and to curb the role and influence of the standing committee itself. Power is being reconcentrated back into the hands of a single leader, and party and state institutions are merging, removing an entire level of technocrats from China’s political process. As in the Maoist period, the party is playing an increasingly interventionist role in people’s lives, such as evidenced by the forced disappearances and persecution of Uyghurs in Xinjiang province. 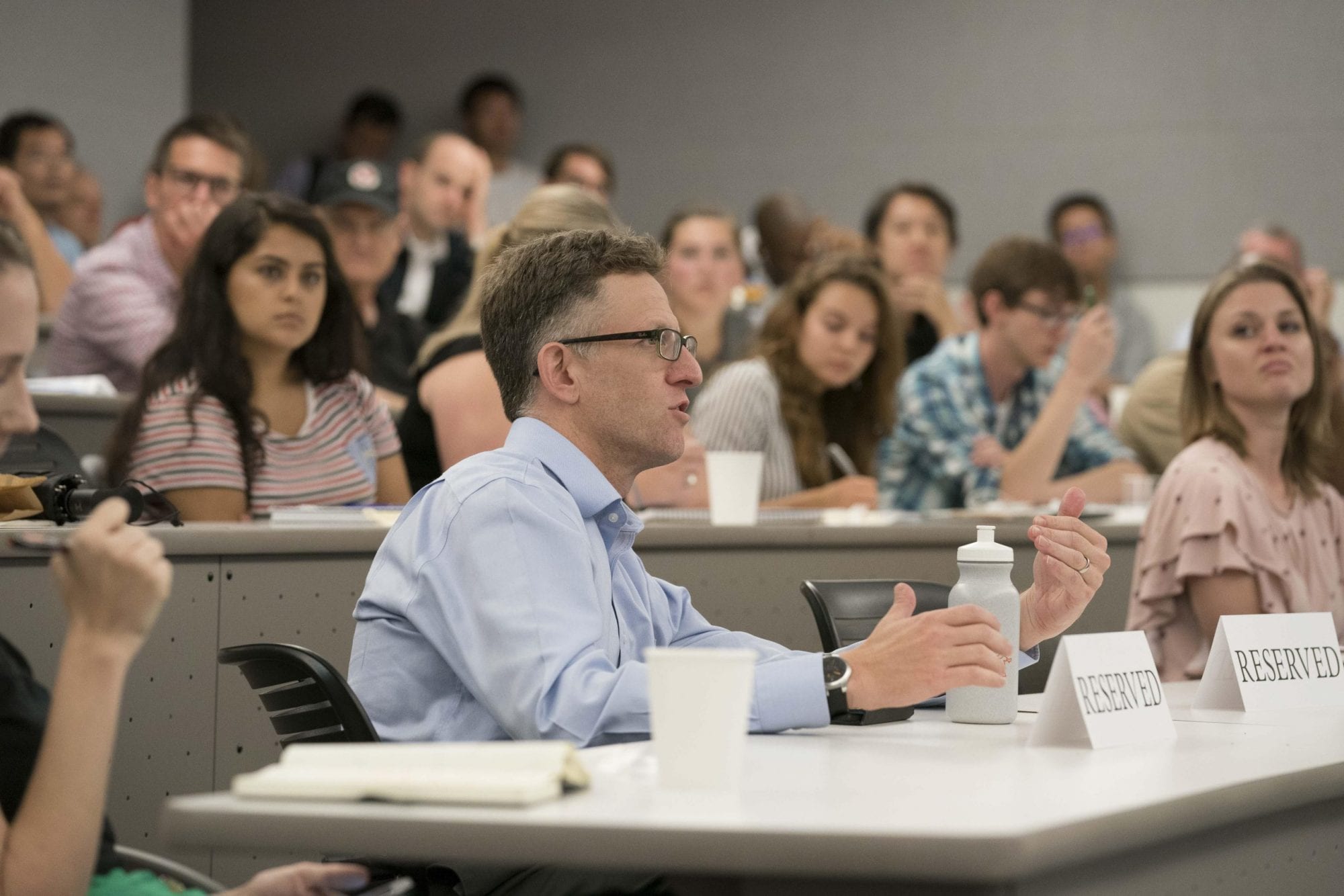 Minzner concluded the talk by asking, “which norm will be the next to go?”

“If I were an American specialist I would draw parallels where the fusion of money and party politics have led to normative and political erosion.” However, when we see the same kind of erosion in a country like China, where the system is of a much newer vintage? “It’s a recipe for a revival of internal political instability.” 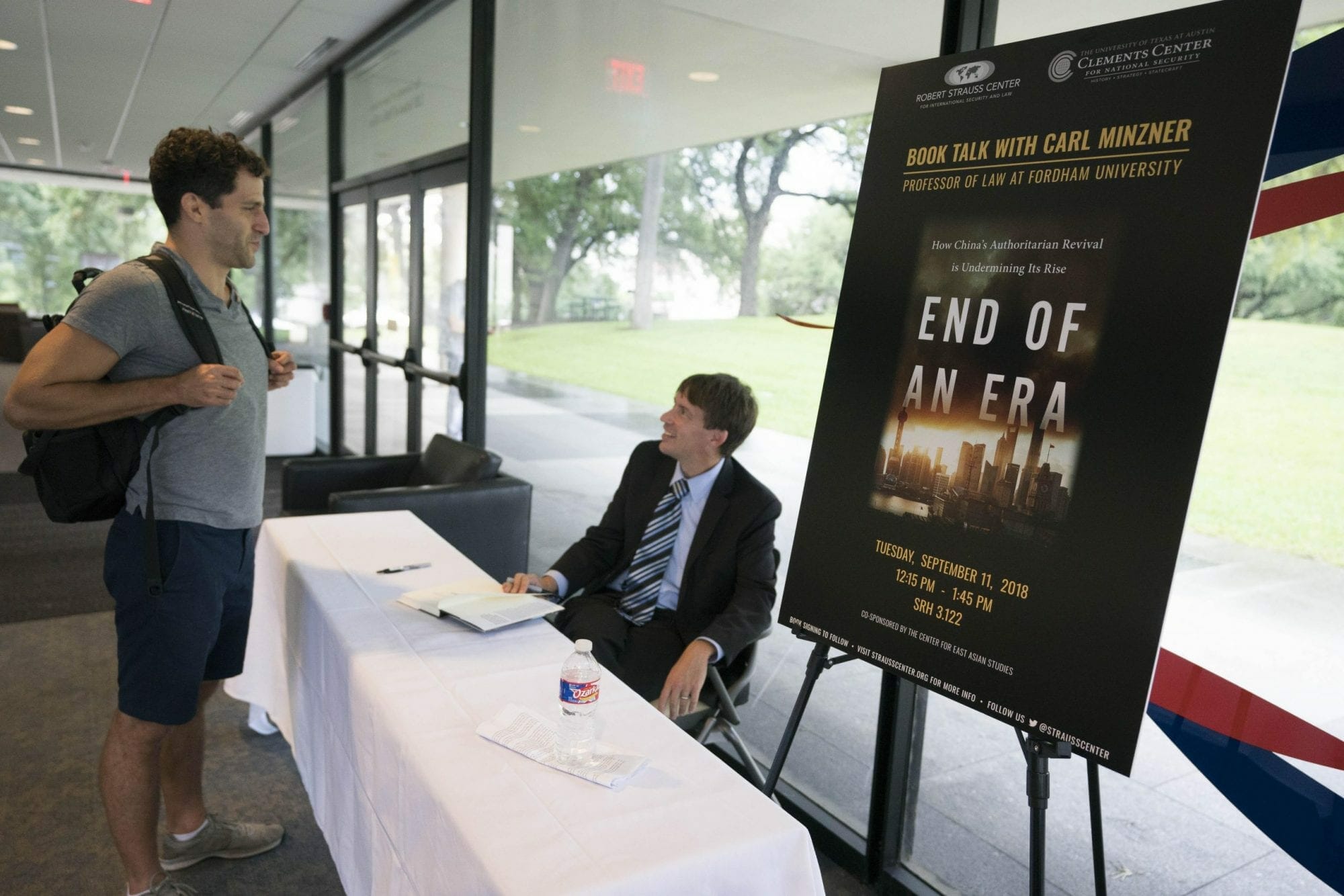 Carl Minzner is an expert in Chinese law and governance. He has written extensively on these topics in both academic journals and the popular press, including op-eds appearing in the New York Times, Wall Street Journal, Los Angeles Times, and Christian Science Monitor. Prior to joining Fordham, he was an Associate Professor of Law at Washington University in St. Louis. In addition, he has served as Senior Counsel for the Congressional-Executive Commission on China, International Affairs Fellow for the Council on Foreign Relations, and Yale-China Legal Education Fellow at the Xibei Institute of Politics and Law in Xi’an, China. He has also worked as an Associate at McCutchen & Doyle (Palo Alto, CA) and as a Law Clerk for Hon. Raymond Clevenger of the U.S. Court of Appeals for the Federal Circuit.