On Thursday, February 15, 2018, the Robert Strauss Center welcomes Maureen Meyer, Director of the Washington Office on Latin America’s (WOLA) Mexico Program, for a talk on impunity and human rights violations in Mexico. The event is part of the Strauss Center’s Brumley Speaker Series, and is free and open to the public.

Photos of the event can be found here, and a video can be accessed here. 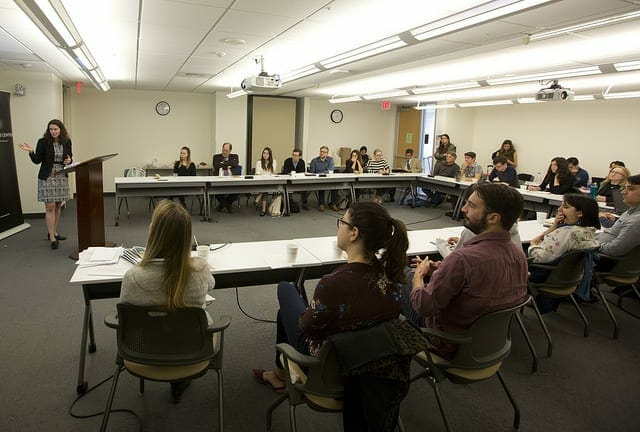 Mexico’s high murder rate has been covered extensively by the media, but the coverage is often lacking nuance and historical context for this rise in violence. Corruption, lack of government accountability, and weak institutions have all contributed to the issue of impunity, or exemption from punishment. The Mexican government has worked hard to pass police, national security, and criminal justice reforms, however specific policies are needed to bolster human rights and ensure equal access to justice. 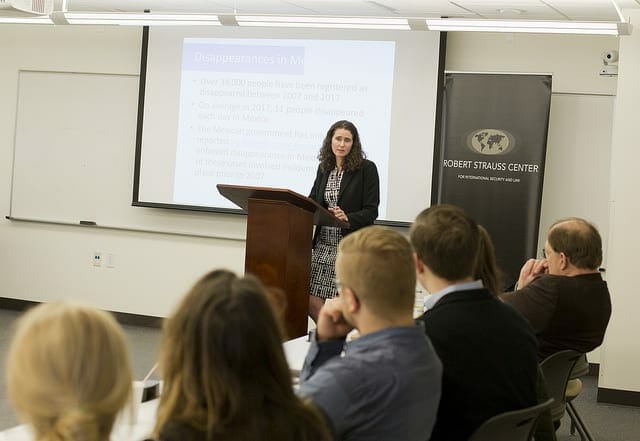 Ms. Meyer’s recommendations to address impunity and human rights abuses include transforming the federal Attorney General’s Office into a national, independent prosecutor, establishing an international advisory committee on impunity sponsored by the United Nations, and using Merida Initiative funding to address lack of training for police and public defenders. 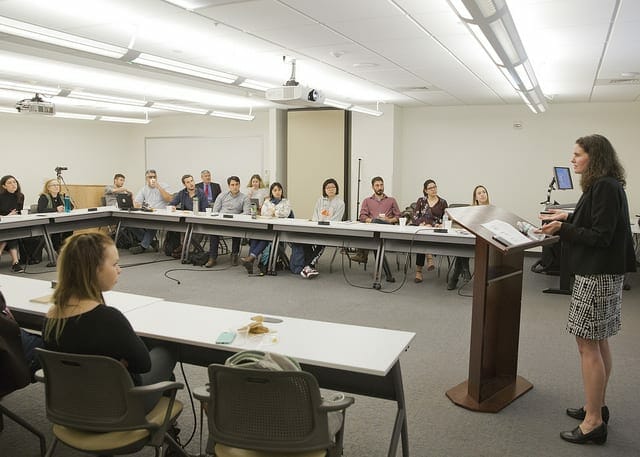 Maureen Meyer directs WOLA’s Mexico program with a special focus on analyzing U.S.-Mexico security policies and their relation to organized crime-related violence, corruption, and human rights violations in Mexico. She promotes justice for human rights violations in Mexico and also carries out advocacy work regarding U.S. security assistance to Mexico through the Merida Initiative. As part of the program she co-directs WOLA’s work on border security and migration and advocates for greater protections for migrants in transit through Mexico and in U.S. borderlands.

Ms. Meyer is a member of the Mexican-based Collective for Analysis of Security with Democracy. She has extensive experience addressing human rights, security cooperation, border security and migration issues and works closely with various human rights and migrant rights organizations and networks in the region. Before joining WOLA in 2006, Ms. Meyer lived and worked for five years in Mexico City, primarily with the Miguel Agustin Pro Juarez Human Rights Center. She was an International Development Fellow with the Catholic Relief Services in the Dominican Republic and also served as the Mexico Country Coordination Group for Amnesty International.