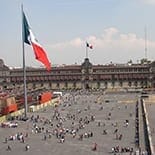 On Friday, September 28, the Strauss Center co-sponsored a conference on “Mexico’s Political Earthquake: The 2018 Elections, Democracy, and Binational Relations” and assessing the results and implications of the 2018 presidential election in Mexico in partnership with the Teresa Lozano Long Institute of Latin American Studies and the C.B. Smith Sr. Centennial Chair # 1 in US-Mexico Relations.

On July 1, 2018, Mexican leftist leader Andrés Manuel López Obrador (AMLO) won the presidency with a commanding 53% of the popular vote. He polled 31 percentage points ahead of his nearest competitor in a four-candidate race, carried 31 of 32 states, and propelled his new Movement for National Regeneration party (MORENA), in alliance with two smaller parties, to outright majorities in both houses of Congress.

AMLO’s mandate is the largest in 36 years, surpassing the three previous presidents since the start of Mexico’s fully competitive democracy in 2000 and the final two presidents under dominant party rule. As of December 1, 2018, the world’s fifth most populous democracy and largest Spanish-speaking country will be led by a nationalistic, left-leaning political figure.

What caused this political earthquake? How might AMLO address Mexico’s chronic problems including poverty, political corruption, and soaring violence, and what does his victory mean for the future of U.S.-Mexico relations over trade, immigration, and illegal drug trafficking? A binational group of leading experts addressed these questions in a full-day conference.

The annual Austin Lecture on Contemporary Mexico was delivered by Denise Dresser as the conference’s keynote address on Thursday, September 27, 2018, at 5:00 p.m. at the Texas Union Building’s Santa Rita Room, UNB 3.502.