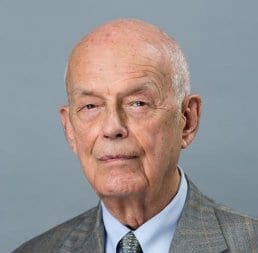 The Admiral’s View of the World: A Public Lecture by Admiral Bobby Inman

On May 12, Admiral Bobby Inman delivered a public lecture to celebrate his career and forthcoming retirement, hosted by the LBJ School of Public Affairs in co-sponsorship with the Strauss Center and Clements Center. Admiral Bobby R. Inman became an adjunct professor at The University of Texas at Austin in 1987. He was appointed a tenured professor holding the Lyndon B. Johnson Centennial Chair in National Policy in August 2001. He served as interim dean of the LBJ School of Public Affairs in 2005 and again from January 2009 to March 2010. Inman served in the U.S. Navy from November 1951 to July 1982, retiring with the permanent rank of admiral. On active duty, he served as director of the National Security Agency and as deputy director of Central Intelligence. After retirement from the Navy, Inman was chairman and CEO of the Microelectronics and Computer Technology Corporation (MCC) in Austin, Texas, for four years and chairman, president and chief executive officer of Westmark Systems Inc., a privately owned electronics industry holding company, for three years. Inman also served as chairman of the Federal Reserve Bank of Dallas from 1987 through 1990.

After introductory remarks from University of Texas President Jay Hartzell, Admiral Inman began his lecture on his view of the world today. Admiral Inman began his lecture with an overview of the global threat landscape, ranking nuclear proliferation as the number one threat to international security. Pandemics and epidemics were ranked as the second greatest threat, as illustrated by the ongoing fallout of the COVID-19 crisis. Inman identified cyber warfare as the third greatest threat, referencing the recent cyber-attack on the U.S. oil pipeline as evidence of the potential impacts of cyber warfare. Fourth on Admiral Inman’s list of international threats is international terrorism. While the Islamic State no longer holds territory, this and other scattered networks are increasingly difficult to track. International narcotics trafficking ranked fifth on the list, and Admiral Inman noted that the difficulty of dampening demand for these illicit substances will continue to be a bulwark for mitigating trafficking.

Admiral Inman then moved to discuss international challenges. The first he discussed was climate change, noting the need for increased investment in battery technology in order to make solar and wind power sustainable alternatives to coal. He then discussed migration, noting that the flow of Syrian refugees out of Turkey and into Europe in recent years illustrated the importance of smart migration policies. The third challenge he discussed was social media, which has at times facilitated the spread of false information that has damaged confidence in democracy. The final challenge Admiral Inman discussed was the changing nature of organizations for economic competition, like NAFTA, MERCOSUR, the TPP, and more.

Admiral Inman then highlighted unfolding global events on a region-by-region assessment. He began with the U.S.-Canada-Mexico agreement, noting that not all elements are settled, and noting the different interests and goals of the parties to the agreement. Moving South, Admiral Inman discussed the demonstrations and rioting in Colombia; turmoil in Peru and Ecuador from COVID-19 and election issues; Argentina’s struggles with debt; and political disarray in Brazil. Moving across the South Atlantic, Admiral Inman highlighted different political successes and challenges unfolding in Africa. In his discussion of the Middle East, Admiral Inman paid special attention to the resumption of hostilities between Israel and Palestine and the clash between Saudi and Iran. He also highlighted the withdrawal of U.S. troops from Afghanistan—an event which he likened to the U.S. withdrawal from Vietnam in 1972. In his discussion of Europe, he discussed the upcoming elections in Germany and President Putin’s attempts to enlist more young people in Russian government. He wrapped up his around-the-world assessment with a discussion of Asia, highlighting the Chinese Communist Party’s various efforts to consolidate control over every sphere of domestic policy.

During the question-and-answer section, Admiral Inman fielded questions on a range of topics including the prospects for Saudi-Iran talks, the role of the private sector in managing pandemics, the Biden administration’s response to the Israeli-Palestinian conflict, and more.