On Monday, September 17, 2018, the Strauss Center, Clements Center, and the LBJ School of Public Affairs co-sponsored a discussion on National Security Dimensions of Global Food Insecurity with Admiral William McRaven and The Honorable Michael McCaul (R-TX), which was moderated by the Houston Chronicle’s Chris Tomlinson. 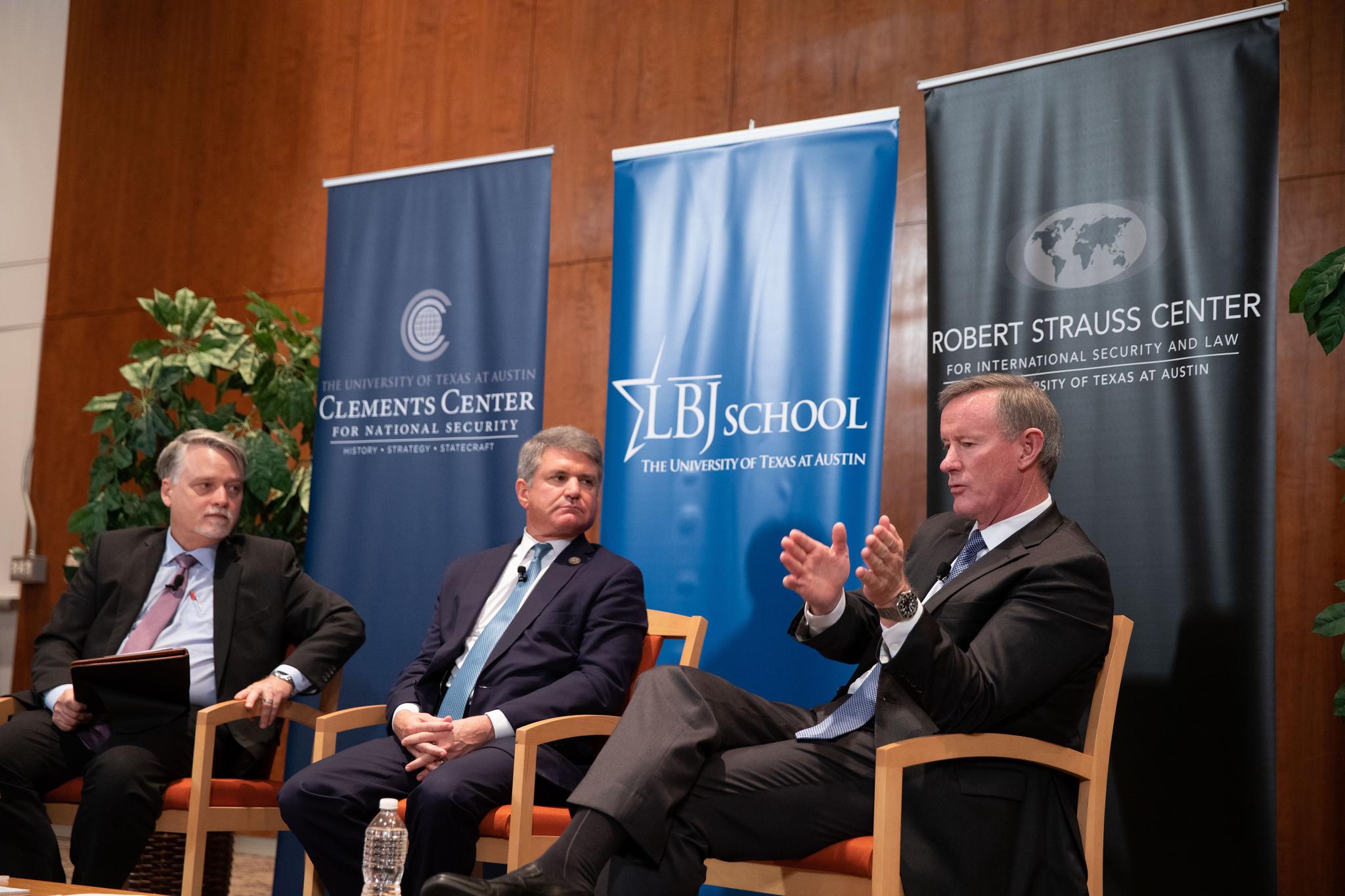 Strauss Distinguished Scholar and the LBJ School’s Associate Dean for Students, Kate Weaver, began the talk by introducing both the speakers and the topic. On the relationship between hunger, malnourishment, and conflict she stated that of the 815 million people who were considered malnourished in 2016, 500 million of them live in countries experiencing conflict. Throughout history, food security has been one of the greatest drivers of armed conflict. As Representative McCaul would later go on to say in his remarks: “Poverty breeds conflict, and conflict breeds poverty.”

Moderator Chris Tomlinson drove conversation through his own questions as well as those posed by LBJ School students and audience members. Ultimately the discussion revolved around the continued need for American engagement, the importance and value of our diplomatic corps, the somewhat frictional role played by military-provided aid, and the need for foreign aid reform.

In his opening remarks, The Honorable Michael McCaul of the U.S. Representative of Texas’s 10th congressional district and Chairman of the House Committee on National Security, discussed the relationship between food insecurity and violent extremism. McCaul noted that areas like Syria, North Africa, and the Sahel face greater threat from violent extremism as a result of poverty. Today the Sahel is particularly vulnerable; food shortages and a lack of government have led to a void that will be filled by ISIS, the Taliban, or countries like Iran. Tomlinson echoed McCaul’s concern on this point, recalling that in his own time in Somalia, he saw men go to Al Shabaab camps and join the militia just to get a meal.

Representative McCaul sits on the House Foreign Affairs committee and chairs the committee on Homeland Security. When asked if people in Congress were talking about this, he assured listeners that this conversation occurs, especially within Foreign Affairs, and told the crowd that “National security is not a party issue.” 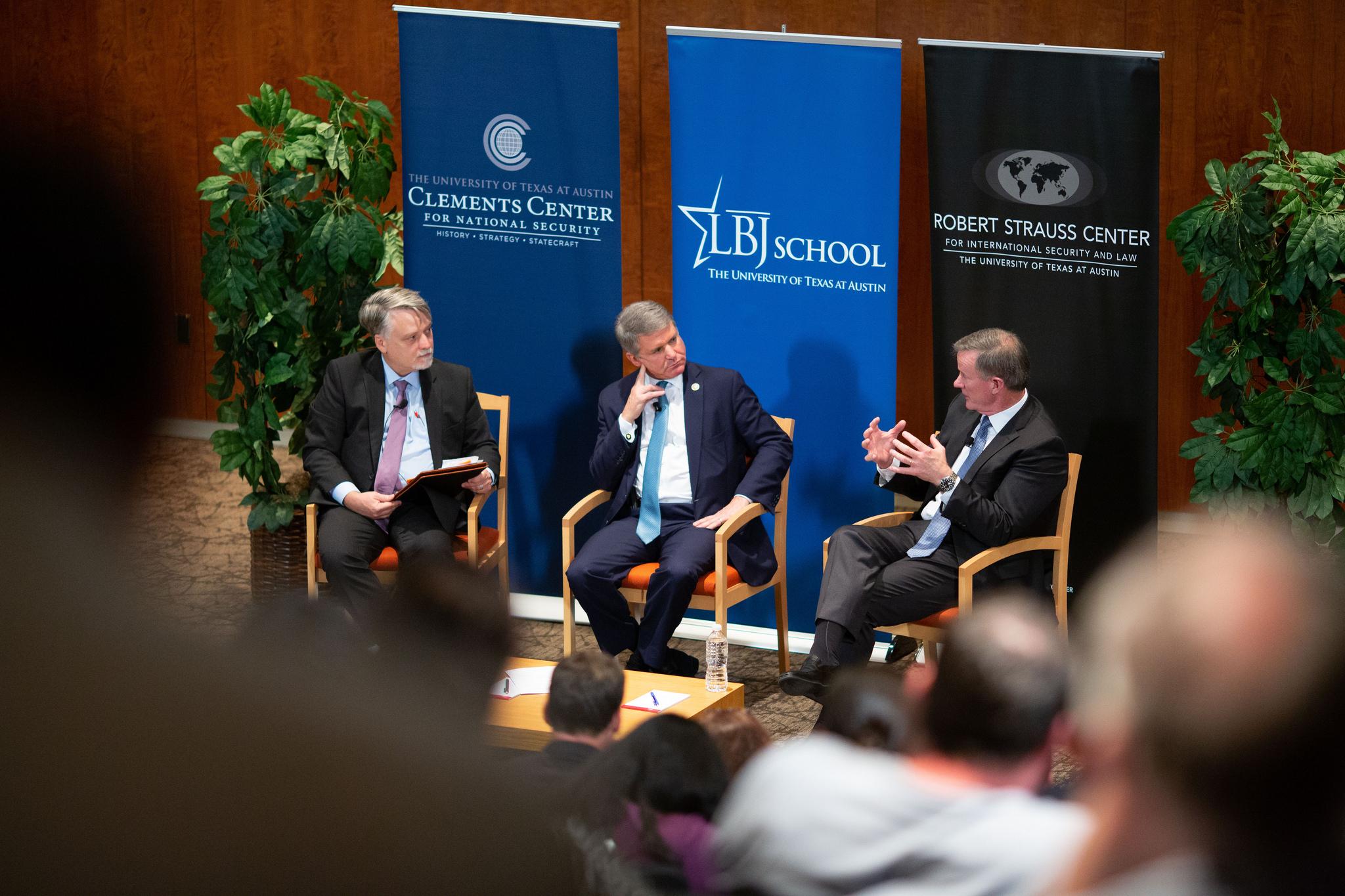 With regard to talk in recent years of cutting foreign aid, McCaul discussed the need for continued American leadership in the world’s most fragile areas. He noted that cutting foreign aid is an easy political slogan. Recalling President Trump’s proposed cuts to foreign aid, he paraphrased Secretary of Defense General Mattis saying, “If you do that we’re just going to have to make more bullets.” McCaul noted that the answer lies not in cutting foreign aid, but rather in using current levels of aid more effectively.

McCaul went on to talk about how, at present, China is readily and happily filling the void created by our absence. He recounted a recent dinner he attended with eight African ambassadors. When talk turned to the realities of Chinese investment, he asked, “Why are you doing business with the Chinese if you know they’re exploiting you?” An Ambassador replied, “They’re there. You are not there. American interests are not there.”

McCaul stressed that the key to addressing the threat and instability created by global food insecurity is, “getting the foreign policy right.” Here he highlighted the importance of American diplomats overseas, recalling the excellent education congressional delegations receive from embassies in fragile states. McCaul noted, citing Vietnam and Iraq, that when Congress gets its foreign policy analysis wrong, things abroad go horribly wrong. In order to accurately address today’s most pressing threats to the United States, policy makers, the military, the State Department, NGOs, and other private entities must work together to address global crises. 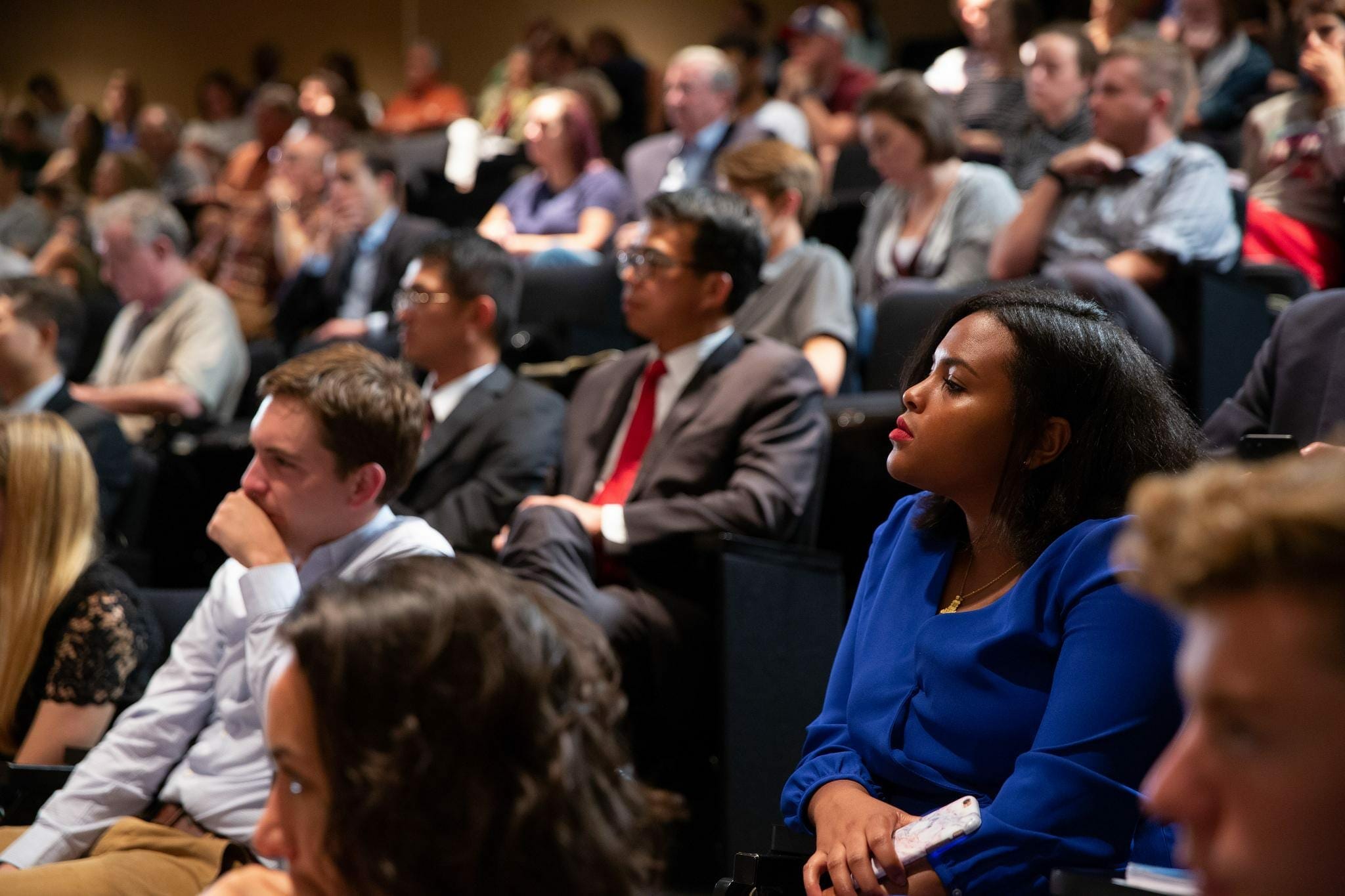 In addressing the relationship between food insecurity and national security, Admiral William McRaven, former Commander of Special Operations Command, former UT Chancellor, and current LBJ School faculty member, contended: “It’s all about terrain, even in the digital age, and it always has been.”

McRaven noted that this fact became abundantly clear to him during his time in Afghanistan. He recalled wondering why in the world would people choose to live in the Korengal Valley in the Hindu Kush when there are better places to live? But people have been living there since Alexander came through Afghanistan. McRaven stipulated that there are four reasons why people have stayed: the first two are safety and access, but the primary two reasons are sustainable food and water. As Americans, we are often able to overlook these factors, but many areas of the world are not fortunate enough to dismiss these most basic concerns. For example in Yemen, critical water shortages are made worse by the economic incentive to produce khat, a kind of chewing tobacco that uses large quantities of water, rather than crops like cauliflower. McRaven articulated that to address global food insecurity, nation states must learn to deal with the problem; “It is about education. It is about infrastructure. It is about incentivizing good behavior, and that is a challenge when your life is about making a dollar off a poppy crop compared to a potato or cauliflower crop.”

McRaven spoke to the role the American military plays in our international humanitarian efforts, noting that the military is often an indispensable component in providing aid. McRaven harkened back to the Berlin Airlift to support the claim that our armed services have always served in that capacity.

In providing aid, the military works in close concert with the State Department. McRaven asserted that in order to more effectively direct aid we must bolster our diplomatic presence overseas. McCaul joined McRaven in this point, recalling that in every country he visits, the first stop is the Ambassador’s office to ask where they need aid delivered. McCaul again referenced General Mattis, saying, “The military’s job is to apply maximum pressure so diplomats can do their job.” McRaven noted that once aid has been directed by the State Department, it’s often delivered by our armed forces simply because the military has the capacity to do so and stated, “The skills that allow us to be superb soldiers are similar skills that allow us to be superb humanitarians.” 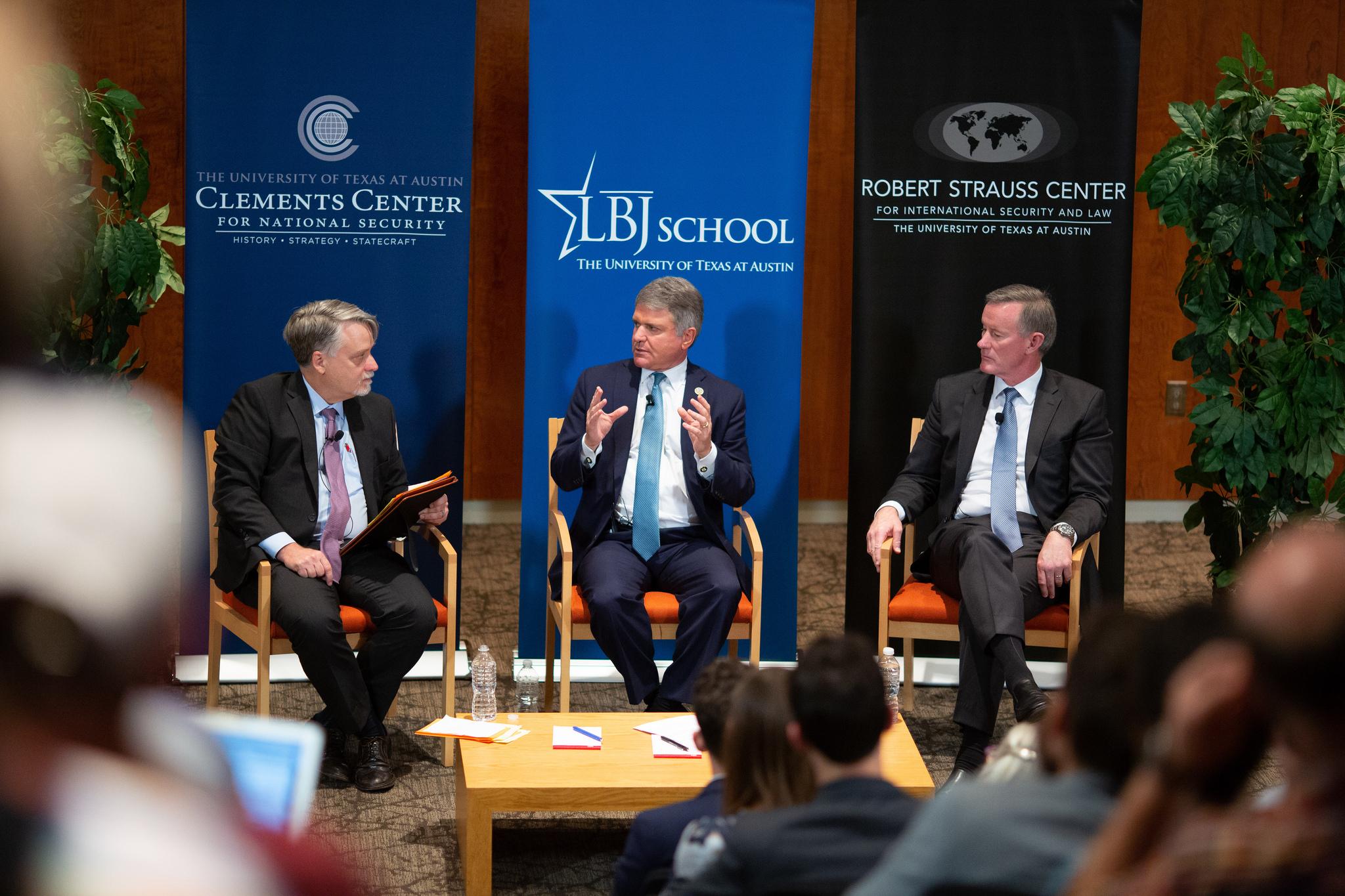 McRaven then described a problem that plagues American aid provision on both a micro and macro level—in order to provide humanitarian assistance effectively we must understand the culture, the importance of the terrain, and the security issues at play. He provided a simple but potent example: in a tribal culture in Afghanistan, you cannot cross tribal lines. You may build a school to serve a region, but should you not know the tribal lines, you effectively disenfranchise an entire group of people. To really garner the necessary understanding, our military must rely on State Department expertise and our diplomatic corps overseas.

Toward the end of the talk, McRaven was asked if, during his time at Special Operations Command, he ever saw the direct effects of food insecurity. To answer McRaven said, “What I have seen is food being weaponized. In Iraq and Afghanistan, in every place there is conflict, food and water become a weapon.” He noted that these resources have always played a part in conflict as a way of one side leveraging themselves against their enemy. From Alexander’s time to ours, “Food and water have always been part of the weapons of war.”

To conclude the discussion, Admiral McRaven addressed what he thinks poses the greatest threat to national security: “K-12 education.” To address the threat posed by food insecurity, moreover to best address the broad range of issues facing American national security, McRaven said we must give the youth of America “the tools so they understand what these issues in our international environment are all about.”

“We have to educate the youth of America so we won’t have to worry about national security in the future,” McRaven stated.