Known for its innovative research bridging policy and academic spheres, the Robert Strauss Center for International Security and Law this month received the esteemed Special Achievements in GIS (SAG) Award for its work mapping security risks related to climate change.

Dr. Francis J. Gavin, Director of the Strauss Center, noted the potential for the tool in supporting research and policy efforts. “The CCAPS mapping tool allows analysis at various levels of inquiry, from assessing high-level trends across many issues to examining detailed data on particular issues and locations of interest.”

The CCAPS mapping tool is one of 175 sites chosen worldwide from over 100,000 nominees. Sites are nominated by Esri staff, then reviewed and selected by Esri’s president Jack Dangermond.

“The SAG Awards identify the organizations and people that are using the power of geography to improve our world and drive change,” said Esri President Jack Dangermond. “At Esri, we are always deeply inspired by the passion and innovation of our users. They deserve recognition for both solving their communities’ greatest challenges and for their invaluable contributions to the continued evolution of geographic science.” 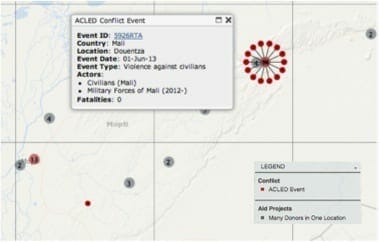 CCAPS partnered with Development Gateway to create its integrated mapping platform last year to analyze how climate, conflict, and aid intersect. CCAPS and Development Gateway have since produced data dashboards for each thematic area under study on the program.

“These dashboards visualize the impressive collection of data created by CCAPS and its partners in an intuitive, accessible platform,” said Jean-Louis Sarbib, CEO of Development Gateway. “Using these tools, policymakers and researchers can analyze trends and see relationships between factors which are too often viewed only in isolation. Esri technologies are key to such impressive integration and help to translate big data into clear insights and deep understanding.”

As a collaborative effort, the mapping tool has brought together data from many organizations, previously housed in disparate locations, to provide the most complete picture yet of climate security and development in Africa.

In August 2012, CCAPS launched the aid dashboard, which includes datasets from CCAPS, the African Development Bank, and the World Bank, all geocoded by AidData, representing the most comprehensive collection of geocoded data on aid projects in Africa.

In February 2013, CCAPS released the conflict dashboard, which brings together mapping, trends analysis, and raw data so that users can visualize emerging and historical conflict trends in Africa. The dashboard utilizes two conflict datasets from the CCAPS program, including the Social Conflict in Africa Database (SCAD) and the Armed Conflict Location and Event Dataset (ACLED).

Last month, CCAPS released a new interactive dashboard that explains the modeling behind the CCAPS Climate Security Vulnerability Model. The model, developed by CCAPS researchers, is used to identify the locations of chronic vulnerability to climate security concerns in Africa. 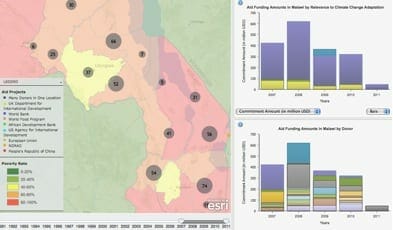 The CCAPS aid dashboard allows users to explore trends in aid allocation
by donor, sector, and demographics within a country.

In addition to being a resource for academics, the mapping tool and thematic dashboards are proving useful in the field. Organizations use the online tools to analyze recent conflict events in their areas of operation, to access information needed for local advocacy on climate issues, and to target adaptation programs in conflict-prone regions.

CCAPS will release additional dashboards on climate vulnerability and climate projections in fall 2013.

The Strauss Center’s CCAPS program analyzes the security implications of climate change in Africa, through funding from the U.S. Department of Defense’s Minerva Initiative. For more information about the CCAPS mapping tool, please visit www.strausscenter.org/ccaps/mapping-tool.html.