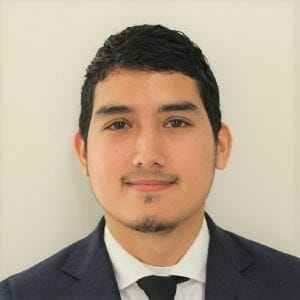 Gabriel Cortez was born in California and grew up in different parts of the state and in central Arizona. He graduated from Northern Arizona University with a bachelor’s degree in Public Administration with Summa cum laude honors. As a Charles B. Rangel Fellow with the U.S. State Department, Gabriel will join the Foreign Service after completing his Master’s in Global Policy Studies at the LBJ School. Gabriel has an extensive work history with the U.S. federal government, working and interning with different offices and agencies like the U.S. Helsinki Commission, U.S. House of Representatives, U.S. Department of Health and U.S. Department of State at its General Consulate in Milan, Italy. He has lived abroad in several countries, including Japan and Italy and served in the Peace Corps in Ukraine for three years as a Volunteer Leader. His policy areas include U.S. Foreign Policy, Diplomacy, National Security, the European Union, Eastern Europe, and Intelligence. As a Brumley Fellow, Gabriel will work with Professor Stephen Slick, Director of the Intelligence Studies Project.