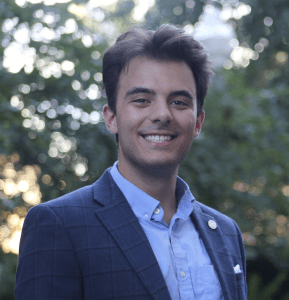 Jared Hrebenar is a rising senior majoring in International Relations and Global Studies, Economics, Government, and Chinese, and pursuing a certificate in Core Texts & Ideas through the Jefferson Scholars Program. Jared is actively involved in UT’s Model United Nations program, having participated in the UT conference since high school and currently serving as the organization’s 27th Secretary-General. He also serves on the executive board of the International Relations and Global Studies Council and the directorate of the Chicago International Model UN Conference. Outside of academics, Jared has worked as a Communications Director in the Texas Legislature, as the Digital Director for the 2018 Democratic Lt. Governor’s campaign in Texas and has worked on or consulted for over a dozen political campaigns across the Lone Star State. For his work in politics, he’s received coverage in the Houston Chronicle and UT’s very own Daily Texan. Jared hopes to one day attend graduate school and lead a career in academia.