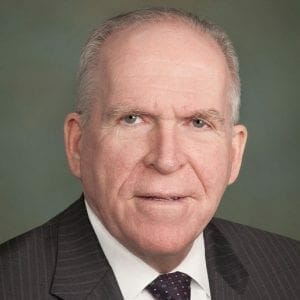 John O. Brennan served as director of the Central Intelligence Agency from March 2013 until January 2017. As director, he was responsible for intelligence collection, analysis, covert action, counterintelligence, and liaison relationships with foreign intelligence services. From January 2009 to March 2013, Mr. Brennan was assistant to the president for homeland security and counterterrorism, shaping the U.S. Government’s counterterrorism strategy and coordinating Obama administration policies on homeland security, counterterrorism, cyberattacks, natural disasters, and pandemics. Mr. Brennan began his government service at the CIA, where he worked from 1980 to 2005 and specialized in Middle Eastern affairs and counterterrorism. He served as CIA’s intelligence briefer to President Clinton, Chief of Staff to then Director of Central Intelligence George Tenet, and Deputy Executive Director. In 2003, he led a multi-agency effort to establish what would become the National Counterterrorism Center, serving as the Center’s first Director in 2004. He retired from CIA in 2005 and worked in the private sector for three years. Mr. Brennan graduated from Fordham University in 1977 with a bachelor’s degree in political science. He studied at the American University in Cairo in 1975-1976. He attended the University of Texas at Austin, earning a master’s degree in government with a concentration in Middle Eastern studies in 1980. Mr. Brennan currently is a Distinguished Fellow at the Center on National Security at Fordham Law School, a Distinguished Scholar at the University of Texas at Austin, a senior intelligence and national security analyst for NBC, and an advisor to a variety of private sector companies.