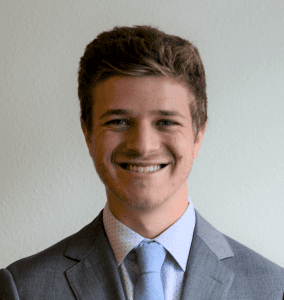 William Wallock is a rising junior at UT where he is pursuing degrees in both Plan II Honors and Quantitative Finance. He is also a student of the Jefferson Scholar Program where he is earning a certificate in the Core Texts and Ideas. He hopes to devote his professional career to working in the intersection between climate security and international law. He is acutely interested in the ways that the changing environment will influence the world’s political and social order. Before beginning undergrad, William spent a year in Israel where he worked as an EMT with Magen David Adom and studied the geopolitics of the Israeli-Palestinian conflict. Since his time in Israel, he has devoted his professional time to working in the realm of environmental policy and law. He worked as a case clerk at Lloyd Gosselink with the water and energy practice group. As a clerk, he assisted the firm during administrative hearings and began learning the intricacies of domestic water law. He then worked as a water policy analyst at the Center for Water Security and Cooperation. As an intern, he worked with state legislators on water shut-off policy and conducted research on sanitation management in India and Ethiopia. William is returning to the Center for Water Security and Cooperation as a water policy analyst and will be joining the World Resource Institute as a climate resilience researcher this upcoming summer. On campus, William is a 2021 summer rider with Texas 4000, a mentor with the Plan II-KIPP partnership, a researcher with the IPD lab, and a TA for Lee Walker’s Civic Viewpoints seminar. He hopes to pursue a joint JD/MPP degree after undergrad. He believes that the Brumley Scholars program will equip him with the necessary knowledge and skills to make a substantial change in the world.