Advances in offshore — and particularly deepwater — production technologies are shifting the epicenter of oil production from the Middle East to the Atlantic Ocean, dramatically reshaping the global market.

Over the last decade, rising oil prices have made deepwater drilling economically viable. While there is a lack of consensus regarding the depth at which offshore drilling becomes “deepwater,” technological developments have been pushing the limits of what was previously thought to be impossible, thereby redefining the term. However, today deepwater drilling is generally regarded as any depth greater than 1,000 feet.1

There are two main technologies involved in offshore oil production; both are capital-intensive and require high levels of expertise to be used effectively.

2.  Drillships: Drillships engage in exploratory drilling before oil and gas production begins. Although drillships are not a new technology (they have been around since the 1950s), new imaging and positioning technology allows for much higher levels of precision during the maintenance and completion of a well. 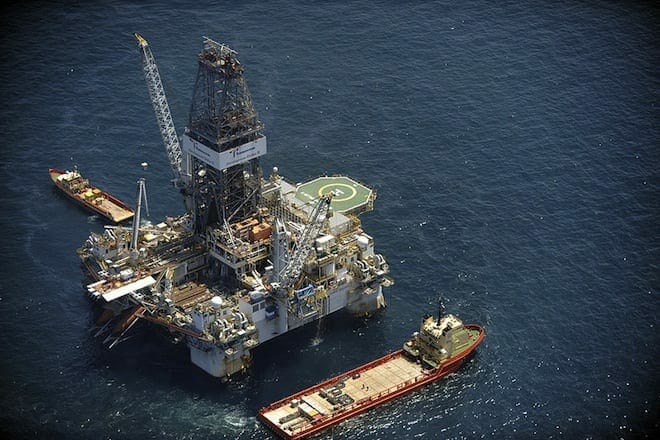 A drillship digs a relief well in the Gulf of Mexico. (U.S. Coast Guard/Wikimedia Commons)

The recent decline in the price of oil has hurt the profitability of deepwater activities and may stifle future development. Nonetheless, companies continue to produce because they are bound by long-term contracts. Since deepwater drilling requires a high level of technical expertise and substantial capital investment, only a handful of companies worldwide engage in deepwater drilling, including:

Globally, deepwater accounts for over 100 billion barrels of reserves, or about 10% of total reserves. There are 3,400 deepwater wells in the Gulf of Mexico alone. These wells present regular maintenance and repair challenges as well as environmental and security risks if not adequately protected and reinforced. However, if produced responsibly, the Gulf of Mexico represents the biggest deepwater drilling opportunity, with 30 billion-40 billion barrels of reserves.2 Brazil also stands to gain from the expansion of deepwater drilling activity, given its more than 30 billion barrels of reserves.3 Finally, the African continent may be the next frontier for deepwater, with over 30 million barrels of deepwater reserves — the largest portion of which is located in Angola. These three regions make up what has been termed “the Golden Triangle.” To date, Mexico has been the biggest producer in the triangle, but Brazil’s Petrobras has been making strides in improving its deepwater capabilities.