It is no wonder that the concept of “energy security” has become so important in recent decades, particularly as the United States wraps up its wars in the Middle East and as Russia repeatedly uses gas exports to pressure its European neighbors. Many commentators speculate that U.S. national security would be better served by increasing the United States’ energy security. However, as with the idea of national security, they are often vague or incorrect in their use of the term.

The International Energy Agency defines “energy security” as simply a country’s ability to:

1.     Have reliable access to the energy it needs; and

In other words, any factors that restrict the United States’ access to energy supplies or raise energy prices to an intolerably high level harm the country’s energy security. While this may seem to be a straightforward definition of energy security, in practice it is far too broad to be of much use. Supply and demand in the global oil market are constantly in flux for a number of reasons, and oil prices naturally follow. But only some of the factors that affect the affordability or availability of energy resources are related to security; many are not. 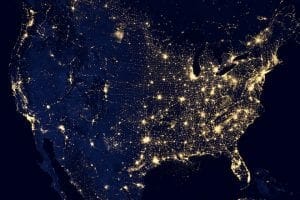 The United States at night. (NASA)

When U.S. government officials – including those in the Departments of Defense, State and Energy, as well as the military and intelligence community – emphasize the importance of increasing the United States’ energy security, they are usually talking about protecting the country against a much narrower set of circumstances: extreme price shocks, acute supply crises and electricity supply security.

Public discussions about energy security almost inevitably lead to talk of energy independence, and the two terms are sometimes even used (incorrectly) interchangeably. Energy independence is the idea that energy security can be achieved by producing enough energy resources domestically to meet U.S. consumption demands, thus eliminating the need to import energy resources from unfriendly or unstable producers. This idea, though popular, is unrealistic given the dynamics of global energy trade.