The Future of American Leadership

On Wednesday, October 17, 2018, the Strauss Center and Clements Center welcomed General John Allen, President of the Brookings Institution, for a talk on “The Future of American Leadership” at the University of Texas at Austin in the Bass Lecture Hall at the LBJ School of Public Affairs. Dr. William Inboden, Director of the Clements Center and Strauss Distinguished Scholar, moderated the talk. 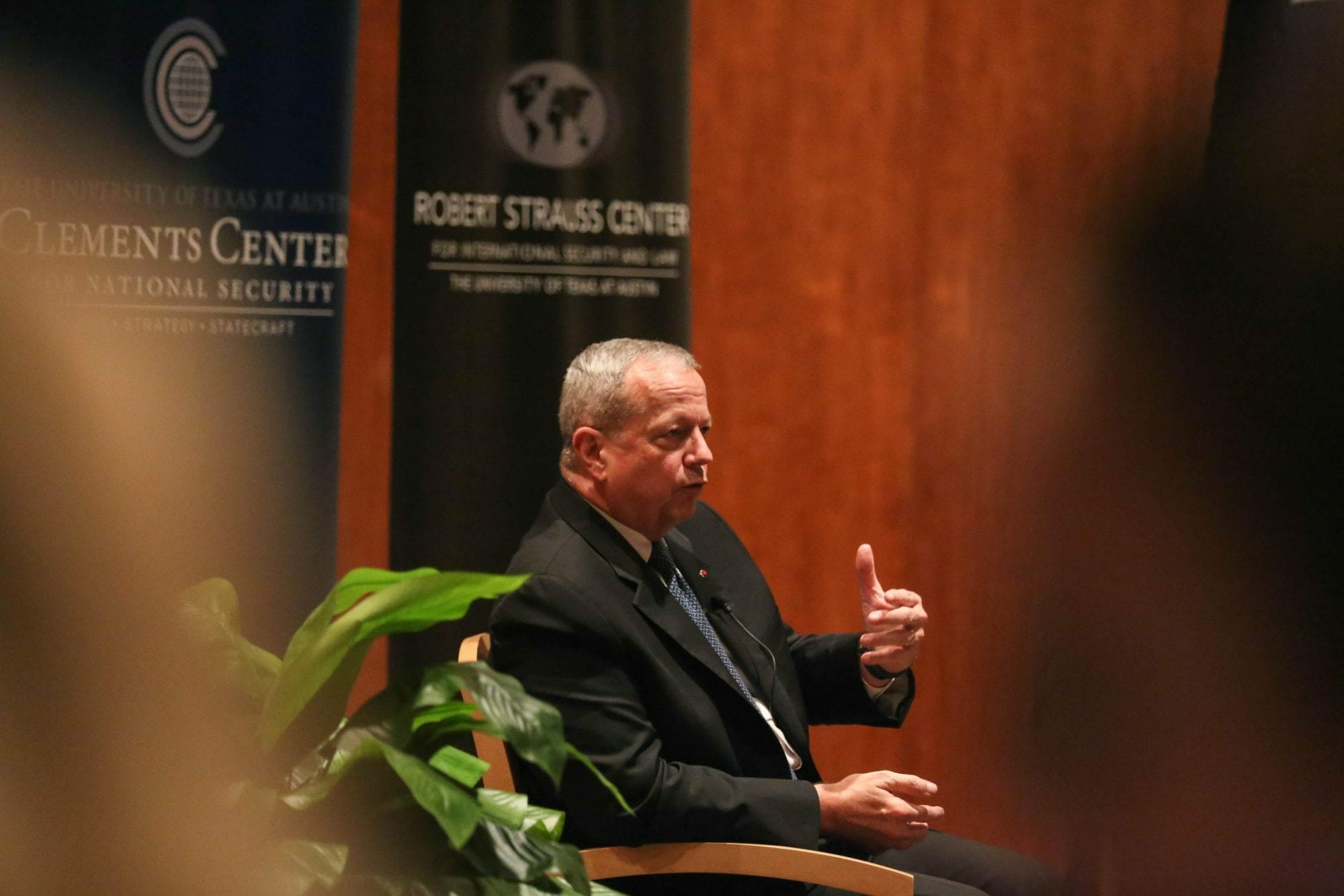 General Allen spoke to American foreign policy on a number of fronts including Saudi Arabia, a changing Middle East, Afghanistan, Russia, and China. With regard to all fronts, one point served as a salient warning: “In a world that strays from democracy, get ready because we will be defending ourselves on all sides all over the world.”

On Friday, October 10, the Brookings Institution cut ties with Saudi Arabia in reaction to Jamal Khashoggi’s death. Regarding that choice, General Allen explained that the U.S.-Saudi relationship is purely transactional right now, and it is not guided by American values. “We as a nation have an obligation to be the shining tower and beacon, and we cannot tolerate this behavior… [The United States] must be willing to address human rights, and that’s not in the conversation right now.” He went on to say that this incident should not be viewed in isolation; “this isn’t just about Khashoggi. We all hoped Salman would be a reformer – the reality is far different.” 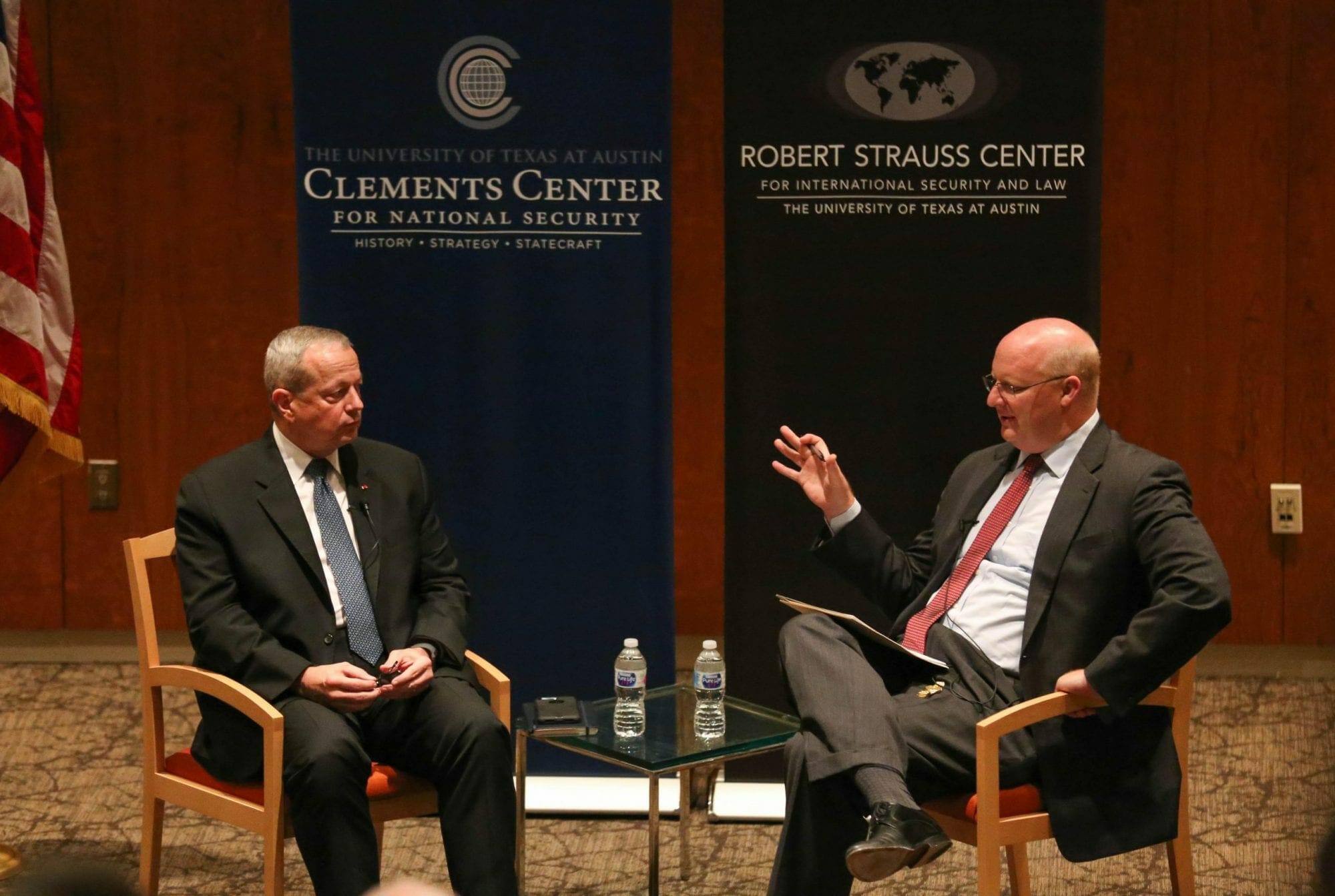 General Allen then addressed three factors that he said must shape the U.S.’s regional strategy in light of a changing Middle East. First, he stressed the influence that the current cold war between the Saudi Coalition and Iran must have on American strategy. Second, he harkened back to the collapse of the Ottoman Empire, reminding the audience that 100 years ago lines were drawn and leaders were put on thrones that did not adhere with the deep rooted history of the region. General Allen remarked, “Systems of governance stumbled along for a century then erupted with the Arab Spring, and who went down first? Those with no resilience, while those leaders with tribal connections faired far better.” The third and final consideration he raised was for specific actions of terror targeting Sunni leadership and Iran’s role as the principal source of regional instability.

The conversation then turned to Afghanistan. General Allen, as the former commander of U.S. Forces in Afghanistan, provided some advice on the subject: “Don’t fight two wars if you start them both yourself.” He noted two critical flaws in American strategy in Afghanistan. First, he asserted, “We strategically relocated forces that could have made actionable difference in Afghanistan.” Second, he explained that we have been fighting the war one year at a time. He recalled meeting with the then-U.S. Ambassador to Afghanistan, Ryan Crocker, who reminded General Allen that he was the fourth commander of U.S. Forces in Afghanistan in four years. Today, General Allen advised, “We must shape the theater for the long term commitment… If you make this much change this quickly you can’t be surprised with the outcome.” 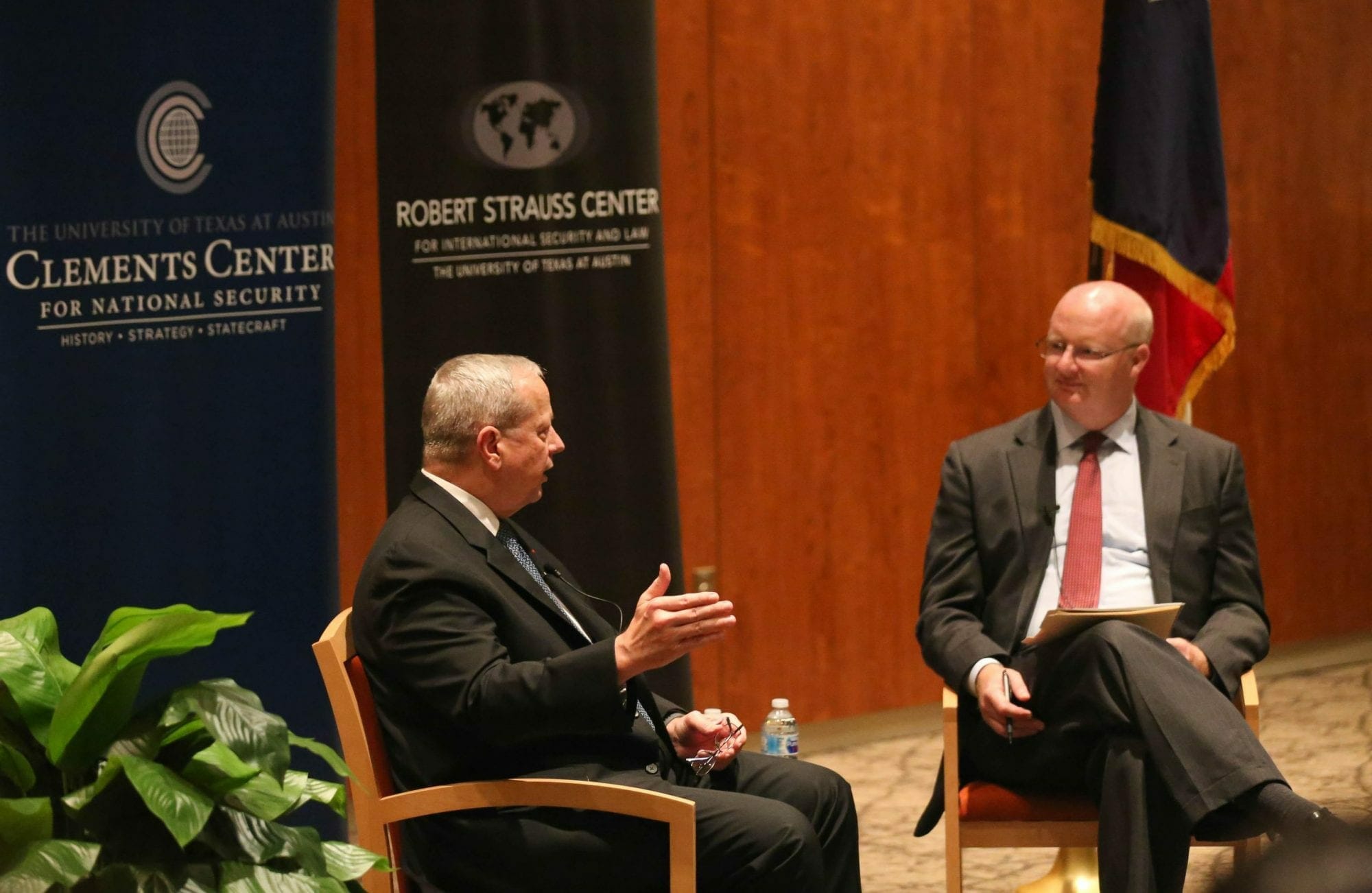 General Allen noted that coming out of Iraq and Afghanistan, American Forces were forced to change tempo, reshape, and modernize. Iraq then collapsed and ISIS erupted, and we had to go back. All the while, American presence was and is still needed in East Asia and with NATO. He recalled: “We were on the defensive on all sides, and we were not ready.”

Today, the President is very focused on Russia and China. General Allen briefly acknowledged that Russia is a real problem again, namely with regard to the annexation of Crimea and in the cyber realm. He then turned his focus to China. He stipulated, “if you treat a nation as a threat long enough, don’t be surprised when they act like one and they think of themselves as one.” He spoke of four possible “Cs” with China: (1) cooperation on our common interests, (2) competition in opportunity, (3) confrontation and brinksmanship, and (4) conflict. Allen pointed to a number of disturbing trends in China right now including the treatment of the Uyghur population in Xinjiang and President Xi Jinping’s intolerance to opposition and his rising cult of personality. 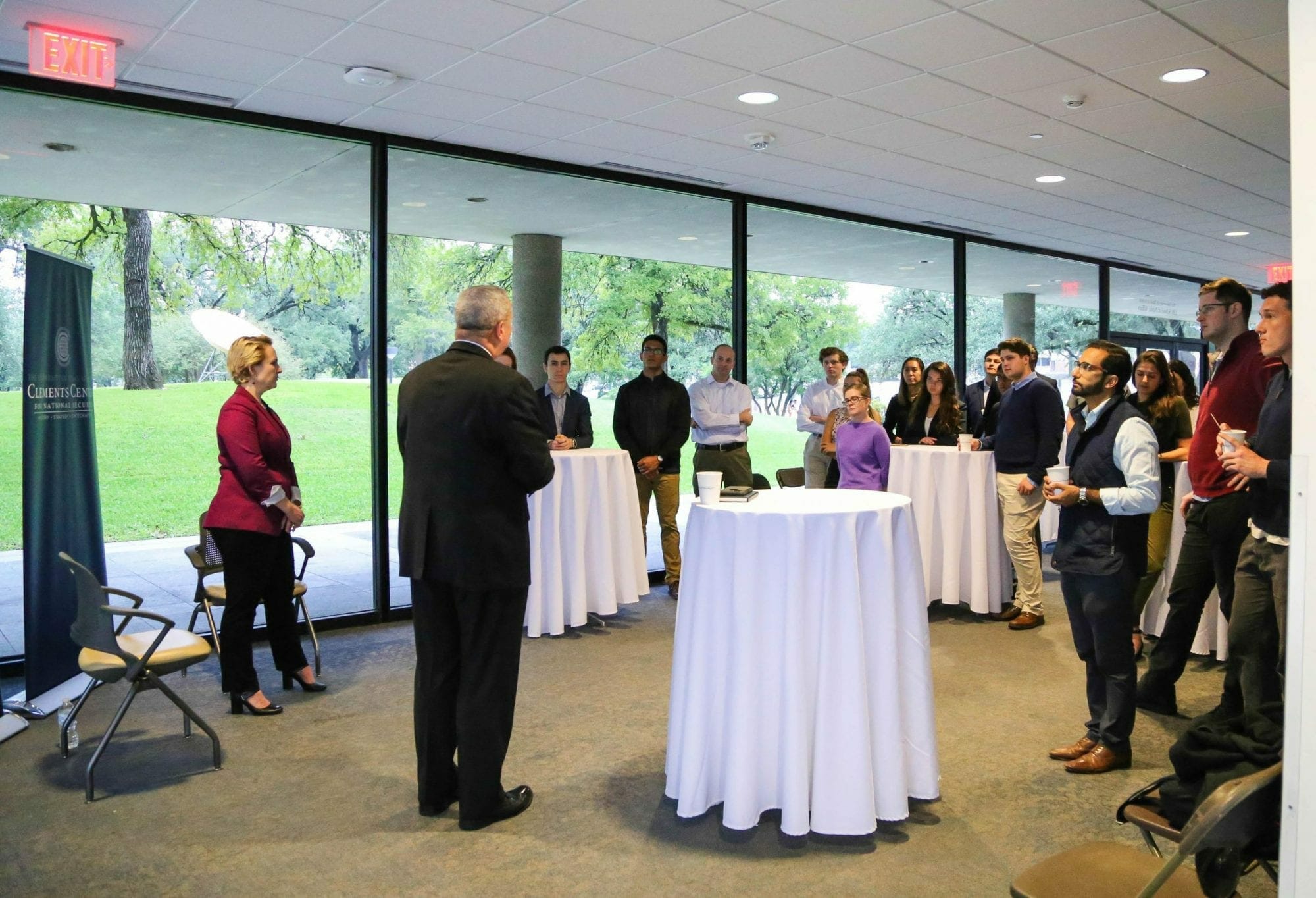 Dr. Inboden concluded the talk by asking General Allen about what issues do not get enough attention; he named three. He shared his worries about the status of Pakistan’s nuclear arsenal. He stressed the threat and coming impact of climate change. He then finished the talk by discussing the rise of the cyber environment. He explained, “We live in a Westphalian world with drawn sovereignty. Democracy is not inevitable and in fact, we are now seeing that it might only be accidental.“ Today, Westphalian governance might not be the most important presence in our lives; General Allen stressed the dramatic influence of “digital governance.” He suggested that Facebook and other social media could tell us what to think, what to buy, and how to interact with our social networks. He asked, “While Mark Zuckerberg touches the lives of 2 billion people a day, what about our president? What about the Prime Minister of India?” To General Allen, the influence of digital governance is “unprecedented and unequaled.”

John Rutherford Allen assumed the presidency of the Brookings Institution in November 2017, having most recently served as chair of security and strategy and a distinguished fellow in the Foreign Policy Program at Brookings. Allen is a retired U.S. Marine Corps four-star general and former commander of the NATO International Security Assistance Force (ISAF) and U.S. Forces in Afghanistan.

Allen served in two senior diplomatic roles following his retirement from the Marine Corps. First, for 15 months as senior advisor to the secretary of defense on Middle East Security, during which he led the security dialogue for the Israeli/Palestinian peace process. President Barack Obama then appointed Allen as special presidential envoy to the Global Coalition to Counter ISIL, a position he held for 15 months. Allen’s diplomatic efforts grew the coalition to 65 members, effectively halting the expansion of ISIL. In recognition of this work, he was presented the Department of State Distinguished Honor Award by Secretary John Kerry and the Director of National Intelligence Distinguished Public Service Award by Director James Clapper.

During his nearly four-decade military career, Allen served in a variety of command and staff positions in the Marine Corps and the Joint Force. He commanded 150,000 U.S. and NATO forces in Afghanistan from July 2011 to February 2013. Allen is the first Marine to command a theater of war. During his tenure as ISAF commander, he recovered the 33,000 U.S. surge forces, moved the Afghan National Security Forces into the lead for combat operations, and pivoted NATO forces from being a conventional combat force into an advisory command.

Allen’s first tour as a general officer was as the principal director of Asia-Pacific policy in the Office of the Secretary of Defense, a position he held for nearly three years. In this assignment, he was involved extensively with policy initiatives involving China, Taiwan, Mongolia, and Southeast Asia. Allen also participated in the Six Party Talks on the denuclearization of the Korean Peninsula and played a major role in organizing the relief effort during the South Asian tsunami from 2004 to 2005.

Beyond his operational and diplomatic credentials, Allen has led professional military educational programs, including as director of the Marine Infantry Officer Program and commanding officer of the Marine Corps Basic School. He twice served at the United States Naval Academy, first as a military instructor, where he was named instructor of the year in 1990, and later as commandant of midshipmen; the first Marine Corps officer to hold this position. Allen was the Marine Corps fellow to the Center for Strategic and International Studies and the first Marine officer to serve as a term member of the Council on Foreign Relations, where today he is a permanent member.

Among his other affiliations, Allen is a senior fellow at the Merrill Center of the Johns Hopkins School of Advanced International Studies and a senior fellow at the Johns Hopkins Applied Physics Laboratory. He is an “Ancien” of the NATO Defense College in Rome, and a frequent lecturer there. Allen is the recipient of numerous U.S. and foreign awards. He holds a Bachelor of Science in operations analysis from the U.S. Naval Academy, a Master of Arts in national security studies from Georgetown University, a Master of Science in strategic intelligence from the Defense Intelligence College, and a Master of Science in national security strategy from the National Defense University.