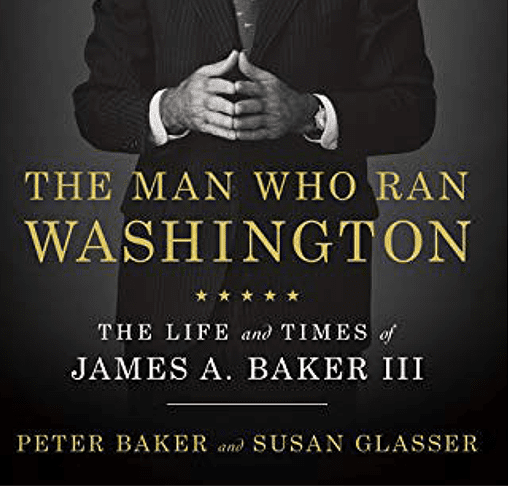 The Man Who Ran Washington: The Life and Times of James A. Baker III

On October 15, 2020, the Strauss Center for International Affairs and Law and the Clements Center for National Security, hosted Peter Baker, chief White House correspondent for the New York Times, and Susan Glasser, staff writer at the New Yorker, for a virtual book talk on their biography on James Baker, The Man Who Ran Washington: The Life and Times of James A. Baker III.

The two began by providing a broad overview of the book and a description of the rationale behind writing it. In addition to Baker’s remarkable policy accomplishments, they noted, he was deeply involved in several major changes in U.S. foreign policy, and his life and story helps to illustrate the Washington of the past, which can perhaps help us to better understand the Washington of today. In that vein, they commented, President Trump’s “hostile takeover of the GOP” has greatly affected the party which Baker was so instrumental in crafting, and therefore his biography is of acute modern relevance.

Glasser and P. Baker spoke briefly about Baker’s personal life, highlighting how his Texas roots affected his career trajectory, and also noted that his career pivot—perhaps “the world’s most successful mid-life career change”—is a useful reminder of both the accidents of history and its inevitability. Professor William Inboden then posed a question regarding Baker’s reputation as a “engineer more than an architect.” P. Baker affirmed that this reputation was accurate and that it illustrates Baker’s capacity to manage crises, given that you don’t want “an ideologue with an inflexible view” in the middle of a crisis. Responding to a question from Professor Bobby Chesney, P. Baker and Glasser also discussed his work with President Ronald Reagan, noting that Reagan took on the role of visionary while Baker translated this vision into reality—another instance of deep competency and focus on results. The two also discussed how Baker managed to thrive in fields in which he had no formal background, highlighting that his “supreme self-confidence” enabled him to enlist the aid of experts without any ego issues resulting from insecurity. The two fielded various questions from the audience, which covered topics including his personal life, his relationship to the GOP of today, the Soviets opinion on Baker, the federal deficit, and his passion for hunting and fishing.

Peter Baker is the chief White House correspondent for The New York Times, responsible for covering President Trump, the fourth president he has covered. He covered President Obama for The Times and Bill Clinton and George W. Bush for The Washington Post.

Mr. Baker joined The Times in 2008 after 20 years at The Post and has written about Mr. Trump since the inception of his administration, through the turmoil inside his White House and the many battles with adversaries outside it. He has written about the investigation into Russia’s election interference, legislative struggles over health care and tax cuts, decisions of war and peace in Afghanistan, Syria and North Korea and the impeachment of the president.

During his first tour at the White House, Mr. Baker co-authored the Post’s original story breaking the Ken Starr investigation of the Monica Lewinsky scandal and served as the paper’s lead writer on the subsequent impeachment and trial of Mr. Clinton. During his next White House assignment, he covered the travails of Mr. Bush’s second term, from the Iraq war and Hurricane Katrina to Supreme Court nomination fights and the economic crisis. During Mr. Obama’s presidency, he covered the raid that killed Osama bin Laden, the reelection campaign and debates over health care, economics, terrorism and the wars in Iraq and Afghanistan.

In between stints at the White House, Mr. Baker and his wife, Susan Glasser, spent four years as Moscow bureau chiefs for The Post, chronicling the rise of Vladimir Putin, the rollback of Russian democracy, the second Chechen war and the terrorist attacks on a theater in Moscow and a school in Beslan. Mr. Baker also covered the early months of the wars in Afghanistan and Iraq. He was the first American newspaper journalist to report from rebel-held northern Afghanistan after Sept. 11, 2001, and he spent the next eight months covering the overthrow of the Taliban and the emergence of a new government. He later spent six months in the Middle East, reporting from inside Saddam Hussein’s Iraq and around the region before embedding with the United States Marines as they drove toward Baghdad. At The Times, he served briefly as Jerusalem bureau chief.

Mr. Baker is the author of five books, most recently “Impeachment: An American History” (Modern Library, 2018) with Jon Meacham, Timothy Naftali and Jeffrey A. Engel. He also wrote “Obama: The Call of History” (New York Times/Callaway, 2017), a finalist for an NAACP Image Award for Outstanding Literary Work; “Days of Fire: Bush and Cheney in the White House” (Doubleday, 2013), which was named one of the five Best Non-Fiction Books of 2013 by The New York Times Book Review; “The Breach: Inside the Impeachment and Trial of William Jefferson Clinton” (Scribner, 2000), a New York Times bestseller; and, with Ms. Glasser, “Kremlin Rising: Vladimir Putin’s Russia and the End of Revolution” (Scribner, 2005), named one of the Best Books of 2005 by The Washington Post Book World. He will publish his sixth book in September 2020, “The Man Who Ran Washington: The Life and Times of James A. Baker III,” co-authored with Ms. Glasser and published by Doubleday.

A native of the Washington area, Mr. Baker attended Oberlin College and worked for The Washington Times for two years before joining The Post in 1988 as a Virginia reporter. Ms. Glasser is now a staff writer for The New Yorker and the two live in Washington with their son Theodore.

Susan B. Glasser is a staff writer at The New Yorker, where she writes a weekly column on life in Trump’s Washington.

Glasser has served as the top editor of several Washington publications; most recently, she founded the award-winning Politico Magazine and went on to become the editor of Politico throughout the 2016 election cycle. She previously served as the editor-in-chief of Foreign Policy, which won three National Magazine Awards, among other honors, during her tenure.

Before that, she worked for a decade at the Washington Post, where she was the editor of Outlook and national news. She also oversaw coverage of the impeachment of Bill Clinton, served as a reporter covering the intersection of money and politics, spent four years as the Post’s Moscow co-bureau chief, and covered the wars in Iraq and Afghanistan. She edited Roll Call, a Capitol Hill newspaper, early in her career.

Her books include “Kremlin Rising” and “The Man Who Ran Washington,” both of which she co-wrote with her husband, Peter Baker.