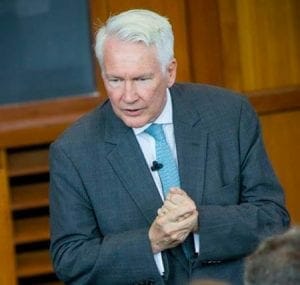 One of the nation’s leading constitutional theorists, Professor Bobbitt’s interests include not only constitutional law but also international security and the history of strategy. He has published ten books: Tragic Choices (with Calabresi) (Norton, 1978), Constitutional Fate (Oxford, 1982), Democracy and Deterrence (Macmillans,1987), U.S. Nuclear Strategy (with Freedman and Treverton) (Macmillans, 1989), Constitutional Interpretation (Blackwells, 1991), The Shield of Achilles: War, Peace and the Course of History (Knopf, 2002), Terror and Consent: The Wars for the Twenty-First Century (Knopf, 2008), The Garments of Court and Palace: Machiavelli and the World That He Made (Atlantic, 2013), The Ages of American Law (with Gilmore, 2d edition) (Yale, 2015), and Impeachment: A Handbook (with Black, new edition) (Yale, 2018).

He has served as Law Clerk to the Hon. Henry J. Friendly (2 Cir.), Associate Counsel to the President, the Counselor on International Law at the State Department, Legal Counsel to the Senate Iran-Contra Committee, and Director for Intelligence, Senior Director for Critical Infrastructure and Senior Director for Strategic Planning at the National Security Council. He has been a member of the Secretary of State’s Advisory Committee on International Law and was, until January 2017, a member of the External Advisory Board of the CIA.

He is a former trustee of Princeton University; and a former member of the Oxford University Modern History Faculty and the War Studies Department of Kings College, London. Formerly the A.W. Walker Centennial Chair at the Law School, Professor Bobbitt is now the Herbert Wechsler Professor of Federal Jurisprudence at the Columbia Law School, though he remains a Distinguished Senior Lecturer at the University of Texas.