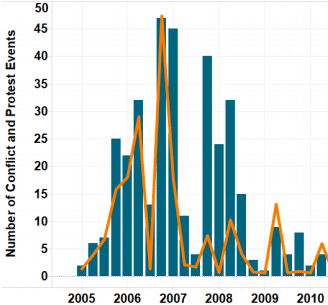 The April 2016 edition of ACLED’s Conflict Trend report focuses on increased protest activity in Chad at the beginning of this year, widespread police abuses in Egypt, the resurfacing of the Mozambican National Resistance movement (RENAMO) violence in Mozambique, al-Qaeda in the Islamic Maghreb (AQIM) and al-Mourabitoun attacks against foreign nationals in Burkina Faso, Ivory Coast and Mali, and the rise of organized anti-state violence in the aftermath of Museveni’s electoral victory and anti-FDC violence in Uganda.