The Strait of Hormuz is a narrow channel, approximately 30 miles wide at the narrowest point, between the Omani Musandam Peninsula and Iran. It connects the Persian Gulf to the Gulf of Oman. The Strait is deep and relatively free of maritime hazards. Its depth is greatest near the Musandam Peninsula and tapers as you move north toward the Iranian shore.

Generally, commercial traffic through the Strait flows through the designated Traffic Separation Scheme (TSS) north of the Musandam Peninsula, but the water is also deep enough for large ships to travel through an Inshore Traffic Zone south of the Omani island of Didimar. Depths in this area reach over 650 feet, but the Omani government restricts access to this area to smaller vessels in normal, peacetime situations. Prior to 1979, the Inshore Traffic Zone served as the main shipping channel through the Strait.

The graphic below shows a high-level view of the different depths of the Strait. Note that, if necessary, fully laden VLCCs could safely navigate through most of the Strait - not just the TSS. 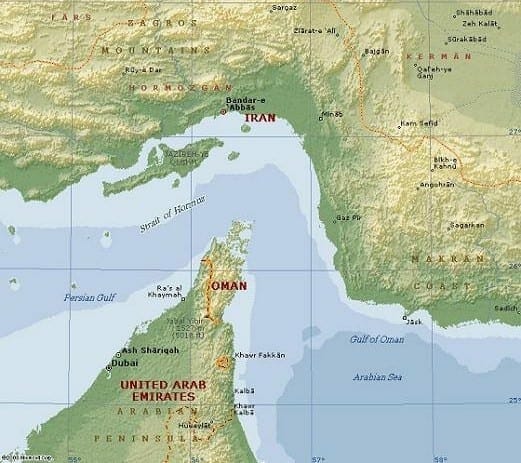 The Strait contains eight major islands, seven of which are controlled by Iran. Iran and the United Arab Emirates disagree as to the ownership of the strategically located Abu Musa, Greater Tunb, and Lesser Tunb islands. Nonetheless, Iran has maintained a military presence on these islands since the 1970s. Additionally, Iran's navy has good access to open sea from bases at Bandar Abbas, BÃ¼shehr, and Chah Bahar. The de facto Iranian control of these islands certainly strengthens Iranian influence in the waters of the Strait.

Caption: Map that shows bathymetry of the Strait (Note: "Unsafe" for tankers indicates that the depth of the water in that area is less than 25 meters - a fully laden supertanker will have draft, or the height of the vessel below the ocean surface, of 20-25 meters)

The graphic to the right shows a high-level view of the different depths of the Strait. Note that, if necessary, fully laden VLCCs could safely navigate through most of the Strait - not just the TSS. 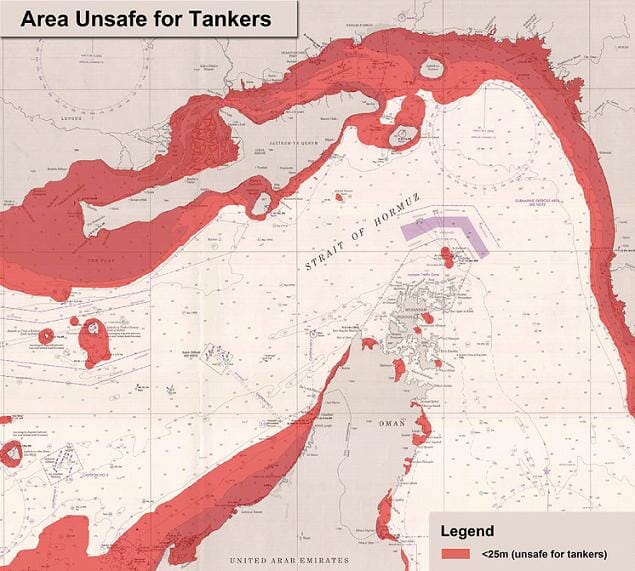 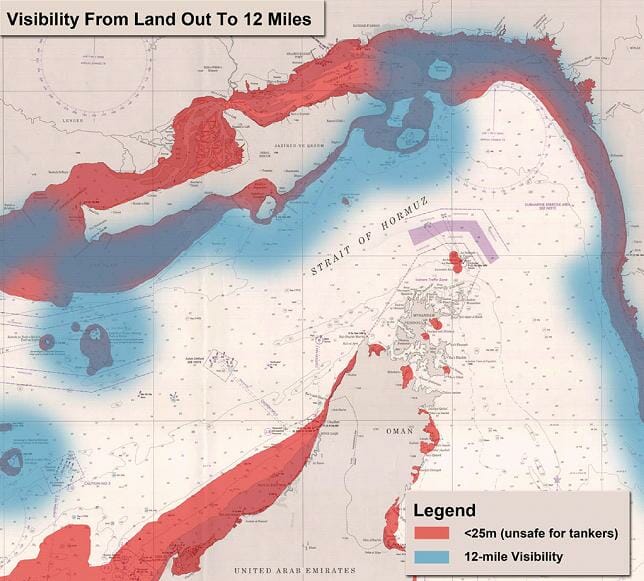 Caption: Map showing both bathymetry and visibility estimates in the Strait

The Iranian gulf coast is generally not conducive to human habitation and development because of both topography and climate: generally arid and unbearably hot. Nevertheless, extensive oil operations in the south have brought some development to the area.

The weather is dry and hot year-round, with July and August being the hottest months. Dust, morning fog, and haze can make visibility in the Strait especially difficult. Dust haze is most common on the southern coast of Iran, especially during the dry summer months. Permanent off-shore winds bring both humidity and dust and, at their strongest, can pose hazards to terminal loading operations of oil tankers in the Gulf.