In the event of a hostile disruption of traffic in the Strait of Hormuz, the insurance market would immediately react. Within hours of such a disruption, insurance premiums for vessels traveling in the vicinity of the Persian Gulf would increase significantly.

History has shown that, yes, insurance premiums increase " but not significantly enough to deter tanker companies from pursuing an immediately increasingly lucrative oil trade. History has also shown that even with the increased risk involved in insuring a vessel in a conflict area like the Strait of Hormuz, there is always insurance to be written for the right price.

As long as oil tankers are unlikely to sink or spill all of the oil that they are carrying, an insurance company will only have to pay compensation for two kinds of costs of an attack: the cost of the repair to the ship and, perhaps, the cost of the delay in delivering the cargo to market (not a standard type of insurance, but a plausible one for transit through a conflict-ridden Strait of Hormuz). Simply put, the value of a tanker's cargo is much greater than the increase in insurance cost: two million barrels of oil is currently worth more than $250 million, while the insurance cost is a fraction of the up to $120 million value of a VLCC. The cost of increased insurance premiums can be amortized across the delivered value of a tanker transit at less than a couple of dollars per barrel of oil. 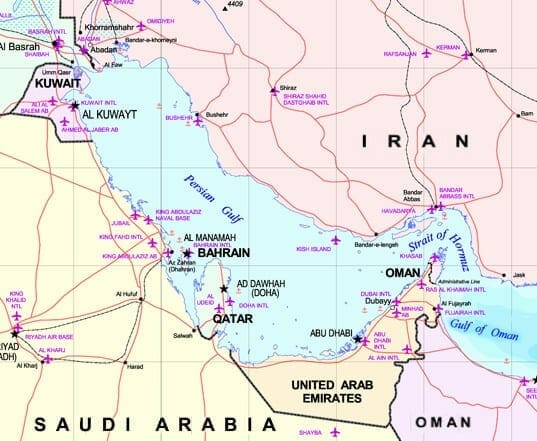 The sections below explain the dynamics of the tanker insurance market:

Oil tankers, specifically Very Large Crude Carriers (VLCC), are some of the largest and most expensive ships in the world. As such, a variety of mechanisms are used to insure oil tankers: hull insurance, cargo insurance, liability coverage (protection and indemnity), and war risk insurance. Oil tanker insurance rates are based on tangible factors such as deadweight tonnage (dwt) and the overall value of the ship itself, as well as what sort of coverage a tanker on a particular voyage needs.

The tangible aspects of oil tanker insurance are relatively uniform across ships of equal size and tonnage. Other coverage, such as liability and war risk factors, are more variable and dynamic, as they change based on the geographical location/route of the ship.

Lloyd's of London provides a market where ship charters find underwriters who will provide them insurance for a fee. Alternatively, some groups of ship owners band together to self-insure through P&I (Protection and Indemnity) Clubs. P&I Clubs pool their insurance risks and avoid fees. Today, most tankers are insured through P&I Clubs. For example, 13 P&I clubs currently insure upwards of 95 percent of the world's ocean-going tankers, measured by tonnage.[i]

War risks are generally excluded from hull and P&I policies and therefore must be purchased in addition to P&I (liability) coverage.[ii] As a result, if a tanker's hull or machinery were damaged in a designated "additional premium area" (areas designated for additional war risk rates), a war risk policy rather than the baseline P&I coverage would pay the claim.

Very loosely defined, a "˜War Risk Premium' is meant to cover any intentional damage to hull, cargo or persons. For the most part, every policy includes some nominal war risk coverage, based on trading routes and patterns. When the risk profile of a vessel is extremely low, such as for tankers that trade explicitly in low-risk areas like the Western Hemisphere, the premium can be as low as 0.001 percent of the market value of the vessel.

War risk premiums become pricier when ships enter designated conflict areas. Each year, insurance underwriters (those granting the insurance) reassess global risk to identify what areas to consider high risk areas. For any given year, there might be 15-20 "additional premium" areas that will require tanker charter companies to pay additional fees for war risk coverage on top of the basic war risk premium paid at the beginning of the insurance year. These "additional premium" areas may be designated in any number of ways, specifying particular countries, ports or even regions.

Charter companies are required to notify insurance underwriters in advance of the ship movement into a conflict area. The underwriter then offers war risk insurance for an additional charge. The policy lasts for a finite period of time, usually between 48 hours and seven days. At the end of the 48 hour to seven day window, the charter must renew insurance coverage if still operating within the conflict area.

History in the Persian Gulf

During the Tanker War, insurance companies quickly responded to the changing conditions in the Gulf.[iii] Many people speculated, especially in 1984, that the Strait of Hormuz would have to be closed because of rising insurance rates and losses. However, even at peak insurance rates, shipping traffic never ceased for an extended period of time.

At the brink of war in September 1980, underwriters overcautiously announced a 300 percent increase on cargo premiums for ships bound for Iran and Iraq, even though merchant vessels were not specifically targeted for attacks at that point. Both Iraq and Iran tried to spread fear and uncertainty in the market place by exaggerating the number and scale of attacks in the early 1980s. However, insurance rates tended to reflect the specific circumstances and targets in the region. For example, when Iraq began staging attacks on Iran's major oil terminal at Kharg island, eventually claiming the area as a maritime exclusion zone, insurance rates doubled for trips to that island. Insurers additionally bumped up rates following particularly successful attacks. After the attack on the Saudi tanker, Yanbu Pride, in May 1984, hull rates reached 7.5 percent for Kharg. Rates also increased for other risky areas.

When Iran and Iraq escalated attacks on shipping in 1981, the people in the energy industry were particularly concerned about the financial stability of the Lloyds of London marketplace, where insurance is traded between insurers and ship owners. Insurance companies had accrued an estimated $575 million dollars in losses by this time. Insurers struggled to develop a generalized risk profile for the region because attacks on shipping did not follow clear patterns.

Rates fluctuated substantially over the next several years, varying with the frequency and severity of attacks. For example, in January 1985 hull risk insurance rates were drastically reduced by half. Attacks were renewed later that year, causing hull rates to again double throughout May. On the whole, insurance claims reached a considerable two billion dollars by the end of the war, half of which fell on the Lloyd's market.

Strategic measures to reduce risk, such as re-flagging of tankers beginning in 1987, had a slow impact on insurance rates. The United States "re-flagged" a number of Kuwaiti tankers during the Tanker War, allowing the United States Navy to provide escorts within the Persian Gulf. Attacks on shipping declined throughout 1988, and insurance rates also began to fall and normalize.

The Gulf War provided a much-needed boost to insurance companies after the massive losses during the Tanker War. In August of 1990, insurers increased war risk rates to respond to the potential for another war in the Gulf. Rates rose to 0.025 percent for most Gulf ports, and rates quickly rose further in the Northern Arabian Gulf. As the risk of immediate war diminished in the last half of 1990, so too did cargo insurance rates, dropping from 0.5 to 0.0375 percent. Because the war never involved much damage to merchant shipping, these increased premiums turned into profits for insurance underwriters.

Immediately following the U.S. invasion of Iraq in 2003, rates for the area around Iraq peaked at 3.5 percent of the hull value, although subsequently they dropped steadily, back down to 0.25 percent by early 2004.[iv]

Implications for the Strait of Hormuz

There is little reason to believe that conflict in the Strait of Hormuz would result in prohibitively high insurance premiums that would significantly reduce traffic for any extended period of time. Although the cost of insurance for tankers certainly increased during the Tanker War, it never increased to the point where the price charged by underwriters for maximum war risk exposure translated to quantity of insurance purchased by charter equaling ZERO. In other words, from a microeconomic standpoint there have always existed people willing to accept and underwrite risk...for the right price.

In early 2008, only certain ports within the Persian Gulf are listed as "additional premium" areas. However, if conflict were to break out in the Strait, the entire Gulf would almost certainly require charters to purchase a war risk policy. Although the additional premium would be expensive, the contribution that incremental cost would make to the delivery price of oil would be quite small. For example, a relatively expensive war risk premium might be two percent of the market value of the vessel for seven days of coverage. Therefore, a $100 million VLCC might pay two million dollars in additional premium costs. When distributed over the two million barrels of oil a VLCC can carry, this amounts to a one dollar increase in the price per barrel.