Cities across the developing world are increasingly regarded as exhibiting characteristics of 'complex emergencies' where conflict co-occurs with multiple additional, and often intractable, demographic, environmental, economic, and social instabilities. The term 'complex emergency,' though, has no clear definition: humanitarian agencies use the designation to describe conflicts where the 'complexity' necessitates intervention by multiple agencies. This framework bases the identification of complex emergencies on the outcomes and the response, but does not often consider the complex, interactive causes, triggers, and co-occurring mechanisms that cause complex crises.

CCAPS researchers have developed an initial framework on how to identify, classify, and predict complex emergencies (CEs). This framework defines CEs as crises resulting from a combination of instabilities interacting with each other. This research focuses on acknowledging the conditions under which political, environmental, socio-economic, and demographic instabilities co-occur, and the discrete consequences that result. This alternative framing allows researchers, humanitarians, and policy makers to focus on the combination of instabilities, their interactive behavior, and the varied relationships between crises triggers.

A redefinition of complex emergencies that concentrates on the complexity of causes is becoming critical for instability management. These specific situations are responsible for cycles of conflict, high civilian mortality, a reversal of development goals, and perpetuating instabilities difficult to combat in post-conflict environments. Further, there is evidence that complex emergency situations are growing, as conflicts become persistent and widespread, demographic patterns across the developing world change, income inequality deepens, and the poorest are subject to increased hazards due to climate change.

Common forms of complex emergencies across Africa share four main types of instability. These include:

CCAPS researchers have developed a Complex Emergency Typology, which examines how different manifestations of each instability combine to form four distinct and common types of complex emergencies that occur across Africa. The framework characterizes each type of CE by root causes, main consequences, and responses. The root causes across CEs do not vary: each involves a conflict or political instability, an environmental component, a poverty or vulnerability dimension, and often a social or demographic factor. To be identified as a CE within this typology, each criterion must be met. This distinguishes these crises from long-term or entrenched conflict situations that involve environmental, economic, or social crises as consequences (but not foreground factors). The four types of complex emergencies identified in this framework are described in the figure below, followed by examples of each type of CE. 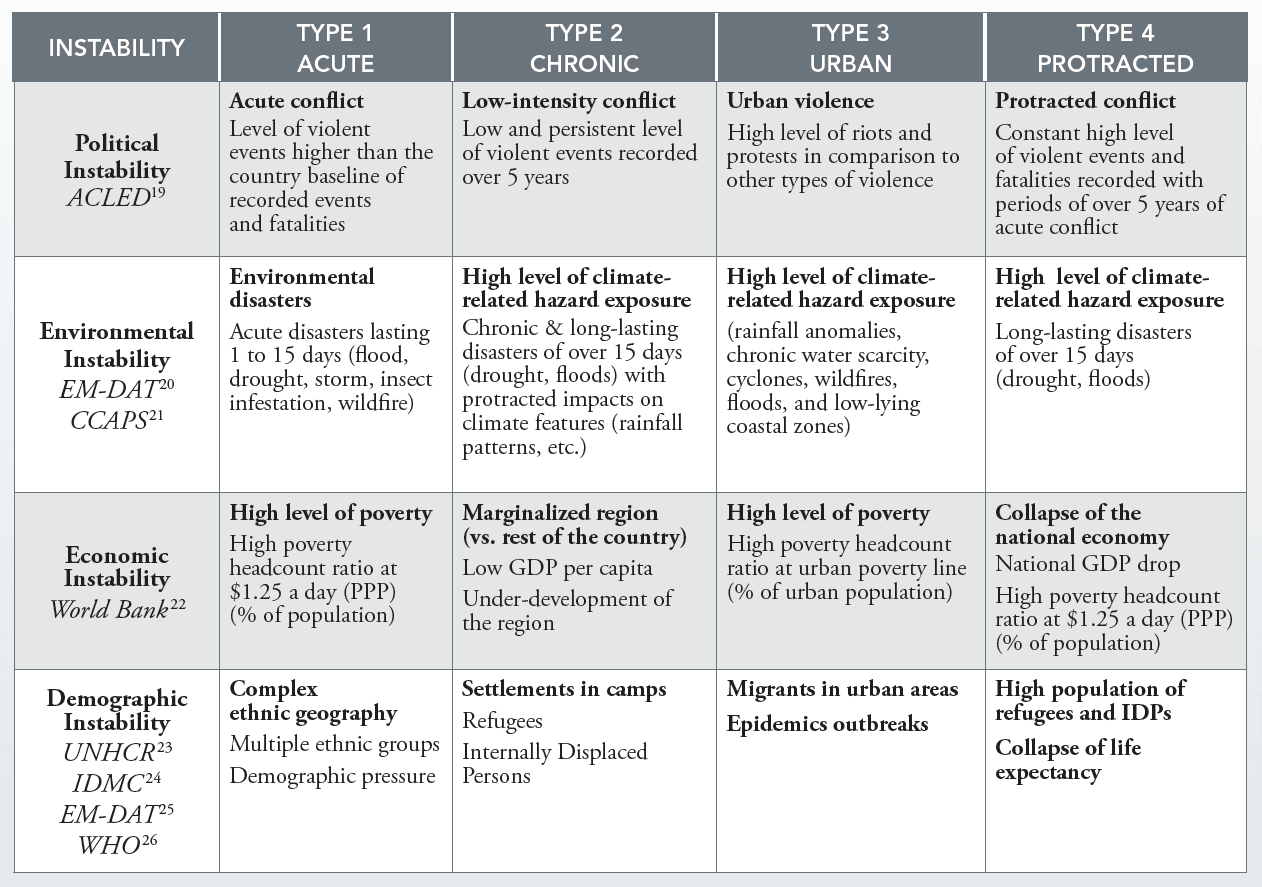 Type 1: Acute CEs
Acute complex emergencies are characterized by an active high-level armed conflict, an acute environmental disaster such as a sudden 'shock' or short-term disaster, a high level of poverty, and complex social and ethnic geography.

Examples include South Sudan from 2011

Examples include Northern Mali from 2007

Type 4: Protracted CEs
Protracted complex emergencies are situations where the state has decayed. These involve high and persistent armed conflict, severe vulnerability to long-term disasters and high exposure to climate change, the collapse of local and national economies, and disturbed demographics due to high IDP and refugee rates.

Conflict Data
All conflict data are from the Armed Conflict Location and Event (ACLED) dataset. ACLED codes political violence by date, location, actors involved, and event type for all African states from 1997-present and updates in real time. Its atomic data structure, where each event is measured as a daily, georeferenced occurrence, uniquely allows users to compare the level of violence between countries, regions, time periods, and actors. ACLED also includes fatality measures. Both event rates and fatality rates can be used to determine baseline violence and volatility rates, over defined time periods. Civic violence is measured through the occurrence of riots and protests. The ACLED dataset defines riots as 'a violent disturbance of the public peace by three or more persons assembled for a common purpose.' These can be organized by political groups or they can be spontaneous. ACLED records reported information on both spontaneous and organized rioting. Protests are defined as "nonviolent spontaneous organizations of civilians for a political purpose.' However, if violence is done to the protesters during the event, it is defined as an act of 'violence against civilians.'

Natural Disasters and Climate Change Data
The natural disasters data in this study are collected by the CRED International Disasters Database (EM-DAT). These include hydrological, climatological, meteorological, biological, and geophysical disasters. CCAPS geo-coded these disasters by region. Further, CCAPS has produced maps that detail climate security vulnerability on the subnational level, including vulnerability to physical exposure to climate-related hazards.

Demographic Data
The United Nations Refugee Agency (UNHCR) and the Internal Displacement Monitoring Centre (IDMC) provide demographic data on refugee and IDP camps. These include monthly geo-referenced local data about settlements through camps, as well as national-level figures. The International Organization for Migration (IOM) provides accurate data on circular and international migration that is not always related to conflict situations. The data about health status of populations are collected by the World Health Organization (WHO) through geo-specific or national surveys. It can be completed by the data on epidemics gathered by the UN Office for the Coordination of Humanitarian Affairs (OCHA), which compiles information through the humanitarian agencies leading interventions in the affected country.

OTHER SOURCES ON COMPLEX EMERGENCIES